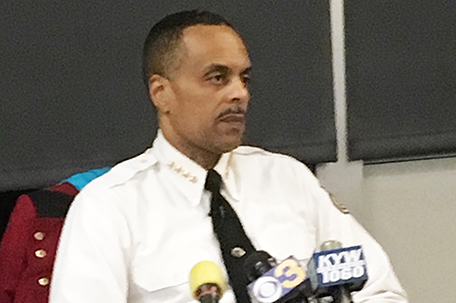 The condition of Officer Jesse Hartnett, the future of stop and frisk, and police/community relations were among the topics covered when Commissioner Richard Ross spoke to the Philadelphia Association of Black Journalists at the group’s monthly meeting.

The relationship between police departments and the community has been something that’s been discussed a lot in recent times due to such things as stop-and-frisk policies that tend to inordinately impact Black and Latino men and the deaths of Eric Garner, Tamir Rice, Michael Brown and others at the hands of police.

Nationally, it appears that there’s conflict between the police, who feel overburdened and underappreciated, and communities of color, who feel unnecessarily targeted by law enforcement.

It’s a tightrope that Philadelphia’s new Police Commissioner Richard Ross walks on a daily basis. As part of a question and answer session he held with the Philadelphia Association of Black Journalists during the group’s monthly meeting, Ross said that he understands where those concerned by police brutality are coming from and plans to continue the reforms started by his predecessor, Commissioner Charles Ramsey.

“I grew up a little leery of the police,” Ross admits. “Before becoming a police officer, I was stopped. When that happens, even if you know that it was for a good reason, it’s unnerving. I have an understanding of the challenges that Black men face with the police.”

But while he understands those challenges, he also understands that there are neighborhoods filled with people of color who are a lot more concerned with that drug dealer on their corner or the person who made it impossible for their kids to play outside due to fear of gunshots, Ross said.

“We should also be careful about assuming how Black people feel about the police,” he said. “You can’t assume that all neighborhoods feel like they’re over policed because not all of them do. You have people who are concerned about their quality of life.”

“Some people are going to call you a sellout [for being a Black police officer], but you have to know that you’re doing this job for the greater good,” Ross continued.

In a conversation that took on a variety of topics ranging from the shooting of Officer Jesse Hartnett to what police accountability will look like to the connection between poverty and crime, Ross spent about an hour with PABJ, one of the founding chapters of the National Association of Black Journalists

Being the city’s Top Cop was one of Ross’s longtime goals, he said. While it wasn’t necessarily smooth sailing to get there, and at a time when mistrust of the police by citizens has risen, he’s happy to be there.

But it hasn’t been without it’s challenges. Ross gave the group an update on the condition of Officer Hartnett, whose alleged shooter, Edward Archer, remains in custody. He has a preliminary hearing scheduled for Monday.

In addition to the local investigation, the FBI is also investigating the Hartnett shooting as a terrorist attack because Archer allegedly told police that he did the shooting in the name of the Islamic State group. The backlash against Muslims that resulted from that detail led to Mayor Kenney speaking out on behalf of the city’s 200,000 Muslims, saying that blaming them for Archer’s alleged actions was wrong.

That bothered Ross. While he understood the concern, he was upset because his boss was getting grief from people he knew so little about that he had to be told who they were, he said.

“It was a bittersweet moment for me,” Ross said. “I received kudos, but I didn’t  care for how Mayor Kenney was treated. I knew where his heart was and was confounded that others didn’t. I was more shocked and dismayed that locally people who know him didn’t understand him. His heart was in the right place.”

He was also bothered by the fact that this controversy took the focus off of where it really should have been; the condition of Officer Hartnett.

“I don’t want people to lose sight of Officer Hartnett and his condition,” Ross said. “His arm was virtually destroyed and he has a long road back physically, but I’m equally worried about his psychological well being. It’s only through the grace of God and his will to live that he’s still with us.”

Ross sees bringing down the city’s rate of violent crime as his biggest challenge, he said. It’s a challenge made somewhat more difficult by some of the social service issues the city faces, such as poverty and addiction.

In order to get crime down, those issues must be dealt with, he said.

“We have to address poverty and it’s relationship to crime,” Ross said. “Philadelphia has a 26 percent poverty rate and a high rate of deep poverty. Because of this, people may resort to doing things that they don’t want to in order to survive.”

Police reform came up several times during the conversation, especially when it comes to the practice of stop and frisk. When Kenney was on the campaign trail, that particular police practice was one he promised to get rid of.

It’s a promise he’s not going to be able to keep, Ross said. Under the 1968 Supreme Court decision Terry v. Ohio, police can stop someone when they have reasonable suspicion that they have committed a crime or is about to commit one.

While that doesn’t allow them to necessarily frisk someone, something that requires articulating the belief that someone is armed, Ross said, police in cities like Philadelphia need the tool of stop and frisk in their toolbox. That ability can sometimes be the difference between catching or not catching someone who has committed a heinous crime, he said.

But that said, stop and frisk isn’t an invitation for police to abuse their power, Ross said. Contrary to what some might think, police are just as disgusted when they see videos of their fellow officers abusing citizens as the citizens themselves.

“Black lives do matter,” he said. “Reforms do need to take place. How we treat people is important, but we have to take into consideration the reality of big cities. We have to find some kind of balance.”