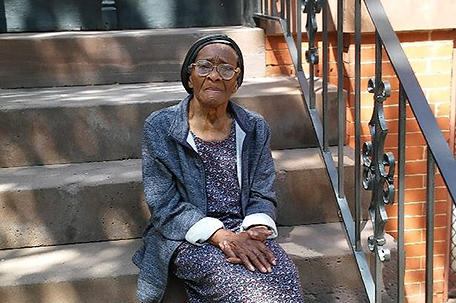 ABOVE PHOTO:  Mrs. Rhona Johnson on the steps of her former Druid Hills home.

Rhona Powell Johnson may not have made it to her 100th birthday, but she certainly lived a full 99.99 years. Before she died, she accomplished one of her lifelong goals — registering and voting.

The New York-born orphan grew up in Baltimore foster homes before relocating to Philadelphia after high school. She never had the documents needed to register to vote. That was until earlier this year, months before June 6, which would have been her 100th birthday.

“My mother was insistent that we get her IDs,” said Tim Johnson, the youngest of her 13 children, who was her caregiver. “She believed that every citizen should do their duty in voting. She never could do that because she never had her documents. Finally, we got them.”

So, 99-year-old Rhona Powell Johnson went to the polls for the first time on May 15 and voted in the Pennsylvania primary. She felt proud that she accomplished that, according to family members. “No, she did not tell us who she voted before because she felt that was private,” Tim Johnson said.

Rhona wanted to make a final trek to the neighborhood where she grew up — — the historic Druid Hill Park section of Baltimore. This was also the neighborhood that the late Supreme Court Justice Thurgood Marshall once called home.

It was here she frequented the Mom & Pop store owned by the family of jazz bandleader and singer Cab Calloway. Rhona graduated from Paul Laurence Dunbar High School in Druid Hill, where she went to school with Calloway and one of his older relatives was her schoolteacher.

Rhona and her son Tim returned to Druid Hill in spring  2017. One of their stops was the block where she grew into adolescence. She paused to have a picture taken of herself sitting on the stoop of her former home at 1825 Madison Ave.

“Most of the people she knew were gone, but there was one elderly woman still left who remembered my mother,” said Tim Johnson. Rhona was pleased to see her old residence still intact. She did lament a bit about the disappearance of the Madison Avenue trolley route and the nearby railroad tracks. 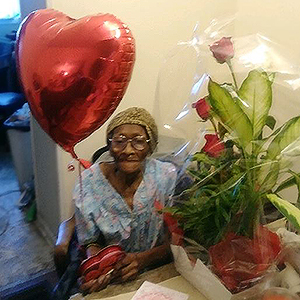 Rhona was part of Baltimore’s social scene, too. As a teenager, she joined the exclusive Elks Lodge in Druid Hill. It is unclear whether she remained a member after she relocated to Philadelphia in 1936. That was the year she met and became engaged to her husband, Ernest Johnson, Sr.

Professionally, Rhona worked as a union presser. When she arrived in Philadelphia, this was one of the stable jobs one could find for those living in North Philadelphia or Port Richmond, where she eventually settled after marriage and reared her 13 children and one nephew. She held her last job for more than 40 years after retiring from the Acme Uniform for Industry, headquartered in Bristol, at the age of 80.

One of Rhona’s  special moments occurred this past Mother’s Day, when she was honored at the Upper Room Baptist Church in West Oak Lane, and was recognized for being a devoted mother.. Though her family members were already planning her 100th birthday party in June, Rhona was more interested in this celebration as the family matriarch and in voting for the first time more than any birthday fanfare, her son Tim said. Although Rhona was a member of the Union Baptist Temple Church, she welcomed the red balloons and presents from the Upper Room Baptist church family.

Family was the center of Rhona Johnson’s life. She remained married for more than 66 years until her husband’s death on April 19, 2003. Her cousin-in-law, Jean Evans of West Oak Lane, was quick to point out that Rhona’s late husband, Ernest Sr., was the first cousin of her father Bernard Odom, Sr. Consequently, Rhona is related by marriage to Congressman Dwight Evans, who is Odom’s grandson. So, Jean Evans grew up going to the Johnson home in Port Richmond.

“Everyone loved her,” said Evans. “The neighbors and other people in the community loved her. She loved her family and treated so many others as family. That is why she is so special. She believed in the importance of family.”

Rhona Powell Johnson was born on June 6, 1918 in New York City. She died on May 31, 2018 in her Port Richmond home. Besides her husband, Ernest F. Johnson, Sr, Rhona Powell Johnson was preceded in death by her children Ernest F. Johnson, Jr., Ernestine Cook, Robert Johnson, Phillip Johnson, Loretta Johnson, and Delores Smith. She is survived by her children Howard Johnson, Sylvester Johnson, Harvey Johnson, Roberta Johnson, Gwen Dean, Brenda Simmons, and Tim Johnson as well as nephew Harry D. Look, grandchildren, great grandchildren and a host of other relatives. Her  celebration of life service was held at Savin Funeral Home in North Philadelphia on what would have been her 100th birthday.