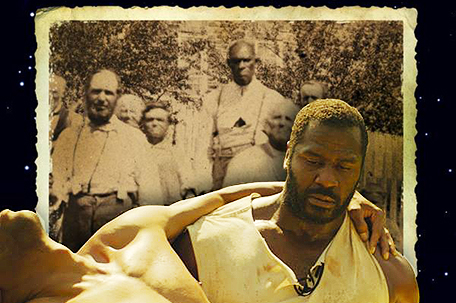 The Philadelphia screening of the much anticipated film “The North Star” didn’t leave reviews disappointed as the Perelman Theater of the Kimmel Center was packed to witness an indie film 10 years in the making.  Writer and director Thomas K. Phillips was all smiles and explained his reasoning for creating the brainchild.  “My original concept was to write it for my kids so they know their history and kind of how they got there.  It’s our history but its American history and it needs to be told.”

Chronicling the life of Benjamin “Big Ben” Jones (former Eagles linebacker Jeremiah Trotter) and his rebellious companion Moses Hopkins’ (Thomas C. Bartley, Jr.) lives as they navigate strenuous times to make it to freedom.  Big Ben is 6’10” and strapping, catching the eye of many slaveholders eager for such a productive field hand.  Word spreads that Master Anderson (John Diehl) wants to sell him to a slave owner in Louisiana, and elder slave Mr. Lee (Clifton Powell, Ray) encourages Big Ben and Moses to steal away and let the night sky guide their travels.  These two friends must rely on the words of good Christians to help them reach their destination.  At times it became nerve wracking to watch as they would flee during the day which makes for difficult camouflage, but they regained their wits.  The duo endures danger and pain, but ultimately makes it to Bucks County, Pennsylvania where they find sanctuary at Mt. Gilead Church.  There are themes of religion and resilience, but also pain and suffering and what it means to be a free Black American in society at a time when it was not popular.

Shot entirely in Pennsylvania and with a budget of $250,000 this film exceeds all expectations.  It is clear Phillips used his resources wisely and created a film that challenges those with similar story lines yet gargantuan budgets.  Every shot, sequence, score, line of dialogue and edit served a purpose in The North Star, carrying the torch for those who have a camera and a vision to tell the truths of black culture.

Review: Light Girls—a drop in the bucket of black issues

Review: Selma—Marching to a golden victory