Review: Selma—Marching to a golden victory 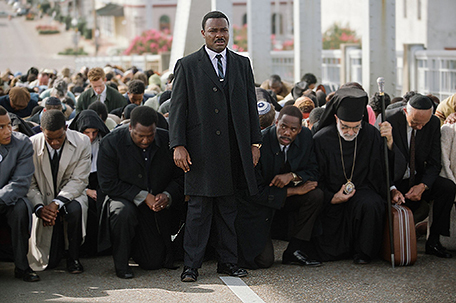 The sunlight through a yonder church window breaks as young black children descend the stairway preparing for what was set to be another Sunday morning in church—that never came to fruition.

This is one of the many get-wrenching sequences that are sprinkled throughout the hauntingly captivating film “Selma.”

This film went through five directors who just couldn’t seem to work around the budget, until someone who was used to independent filmmaking finances came along—Ava DuVernay.  Director of independent successes, I Will Follow and Middle of Nowhere, DuVernay tugs at human emotion once again with the story of Rev. Dr. Martin Luther King, Jr. (David Oyelowo) and civil rights organizations like the Student Nonviolent Coordinating Committee (SNCC) and the Southern Christian Leadership Conference to tell the story of brutal voting discrimination in the deep South.  This issue prompted people from across the country to come together at such a flagrant time to march across the Edmund Pettis Bridge in Selma to Montgomery, Alabama in 1965.

Paul Webb is the head writer of the screenplay, and paints such a fluid picture through dialogue that makes every word profound and essential to the storyline.  Bradford Young did a superb job as cinematographer, enhancing visuals, taking us back to the 60s and adding subtleties that worked so well throughout the duration.  The lighting was something of celestial quality, especially for shots including King played so divinely by Mr. Oyelowo.  And if casting wasn’t already phenomenal, get a glimpse at spouse Coretta Scott King (Carmen Ejogo; Lackawanna Blues) who seems to be a distant relative of the leading lady.  Exquisite costume designs were executed by veteran Ruth E. Carter, making me wish I could have a few of those classy rich brocade gowns or patterned robes in my own wardrobe.

As a black person in America, Selma showed up at just the right time, as there are so many parallels in this film that can be seen in 3D.  Art truly imitates life in this case.  Other blacks in the audience provided just the amount of empathy throughout various sequences, clapping or exclaiming their approval or acknowledgement through particularly difficult scenes.  The slow motion sequences are few and far between, but enhance the story as it increases the level of emotion the audience should feel during the occurrence.

I loved the cameo of the radical and young Nation of Islam Malcolm X (Nigel Thatch), which prompted grand applause in the theater.  Everyone who signed on to play a part in this historic film made it worthwhile through his or her performance.

The main reason this film is so successful is because of its ability to humanize everyone and their trials.  Even the antagonists LBJ (Tom Wilkinson), J. Edgar (Dylan Baker), and George Wallace (Tim Roth) come down to earth in this film.

Through King’s infidelity, to Mahalia Jackson’s (Ledisi) stirring song in the midnight hour, this film allows the audience to remember that these stars of history were human and had flaws.  This aspect is so expertly covered, along with the moments of happiness, tenderness, and melancholy.  Not to mention the stirring track “Glory” by John Legend and Common, taking us from past to present with lyrics that make us think, and an intonation that takes us all to church after one stanza by the chorus.

After the screening, there was a Q&A with the director herself, explaining that she chose not to cover King’s death because everyone knows what happens, but doesn’t know much about this aspect.  She explained that as a black female director, she only got one shot to execute this film to the best of her ability and would not be given others as her white counterparts would.  Her speech and answers to audience members’ questions proved that she is capable of industry magic.  I am absolutely in love with her artist, and cannot wait to see what else is brewing for the hit maker.

There shouldn’t be a doubt this movie is one to be revered by all who were in the struggle, learned of it and from it, and those who can empathize.  This film along with its maker deserve every accolade coming their way, this is quite the image of black excellence.