Review: A new take on ‘The Bodyguard’ 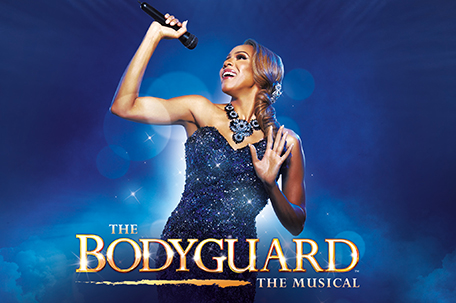 Those of you who grew up listening to R&B and Pop know that there was only one who earned the title “The Voice”… the incomparable Whitney Elizabeth Houston. Her range, tone, other worldly vocal agility, clarity and stage presence made her the untouchable legend that she is. She crossed demographics, broke barriers, and took over the Pop and R&B charts for the span of three decades. After her untimely death in 2012, her most notable film work ‘“The Bodyguard” was adapted for Broadway. Grammy nominated, multi-platinum singer Deborah Cox, now takes on the role of singing sensation Rachael Marron in the Broadway production. Cox and the cast which include Judson Mills as Frank Farmer, and Jasmin Richardson as Nicki Marron, bring the musical to life in Philadelphia at The Academy of Music.

Any true fan of Whitney Houston knows “The Bodyguard” soundtrack, was music utopia. “Queen of The Night, “I Have Nothing”, “Run To You”, and last but certainly not least Houston’s rendition of Dolly Parton’s “I Will Always Love You”, gave fans a once in a lifetime experience. A certain someone who will remain nameless, played their “Bodyguard” cassette tape so often that is unwinded, and had to be replaced with its sturdier CD counterpart.

Not only did fans of Whitney love the music, but they loved the story. Arrogant, defiant, and supremely talented Rachel Marron fears for her life when a fan’s adoration turns into infatuation. Insert Frank Farmer, the stoic, no- nonsense bodyguard hired to protect her. Disdain transforms into romance while the thriller unfolds. If as an audience member of “The Bodyguard”  musical, you hope to experience it in a way that is identical to the film, don’t….  it’s  different.

The biggest difference being that the Broadway storyline transforms Rachel Marron’s body of work into Whitney Houston’s. Fans of Whitney will be happy to know that you will see most of Houston’s biggest hits performed throughout the show. The songs serve as the base and explanation of the love story developing between Rachel and Farmer. Whitney’s discography also serves as the soundtrack for the romantic feelings and simultaneous jealousy brewing in the heart of Rachel’s sister Nikki.

“The Bodyguard” musical does not serve as a mirror to the original plot and storyline, but it does pay homage to Whitney Houston in every way.

While the first act was solid, the second act felt a bit rushed. The climax sequences at the award show could have been a touch longer, and the scenes where Rachel and Farmer are falling in love could have used a bit more tension to add to the pace. Pacing aside, a few things are undeniable… this cast is very talented. Deborah Cox did her homework. At certain times you can hear reminisces of the timber of Whitney’s voice and phrasing, even in the way that she delivers her lines. The nuances Jasmin Richardson adds to Nicki’s character make you root for her to escape Rachel’s shadow… even though she is a semi-villain. Judson Mills added a humor to Frank Farmer that was charming and a welcome addition. There are tender moments, and there are sequences that will make you laugh of loud, particularly the karaoke rendition of ‘Where Do Broken Hearts Go’ by three members of the ensemble. Cox hits a lot of the right notes… so does Jasmin Richardson. Cox excels specifically in second act’s studio rendition of ‘All The Man I Need’ and the finale of ‘I Will Always Love You’.  Chants of ‘sing Deborah!’ echoed throughout the theater followed by a standing ovation after she sang the last notes.

If you love Deborah Cox, you will enjoy “The Bodyguard”. If you are a fan of Whitney Houston and her body of music, you will love it. If you’re a stickler for storylines you may struggle from time to time with the changes, but you will still revel in the experience.

“The Bodyguard” will be at The Academy of Music February 21st through February 26th. For showtimes and ticket information, visit www.kimmelcenter.org.

P.S. Stick around for the reprise of “I Want To Dance With Somebody” after the finale…  you won’t be able to stay in your seat!

Deborah Cox loves the ‘beginning of a new chapter’