Review: “Motown the Musical” makes return to the City for a funky second time around 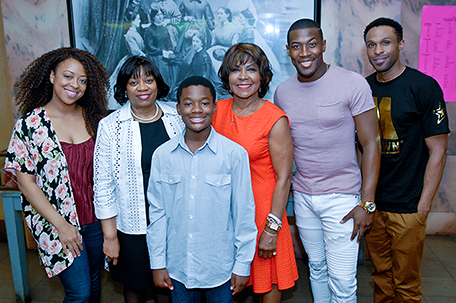 The stage was set for the best performance in the land to come to Philadelphia for the second time– “Motown the Musical” is back with some new juice this time around.  The last day The Academy of Music hosts this production is June 11, so make sure to get in one of those seats while Diana Ross’s (Allison Semmes) hairspray is still holding, otherwise you’ll miss out!

The vibrant cast is back to share their passion for the stage and the story they help tell of a young Black man by the name of Berry Gordy (Chester Gregory) who wanted to create a better way for our soul-shaking music to be heard and distributed.

As usual, you can expect to be wowed by the costume designs by Emilio Sosa and the music arrangements by Ethan Popp, but one of the more notable changes was the newer digital component, using new graphics to further tell the story of Motown through imagery.  The stage was ablaze from start to finish as actors sang and danced their way quite literally through history from Joe Louis winning the fight to the riots that ensued once Rev. Dr. Martin Luther King Jr. was assassinated.  The audience was fully engaged as beloved hits were sang and clapped to.

One thing this production really does well is audience participation.  They are not afraid to break the fourth wall and talk to the audience, or even get them to sing along, no matter how poorly they may do so.  It’s a fun time, and they make sure to give all the energy, soul and fun they can muster while remaining true to the political climate in history as well as discussing the struggles Motown as a company faced.

There really is no other way to enjoy Motown the Musical other than to experience it firsthand as it truly is worth it.  You’ll laugh, maybe shed a few tears, clap, and sing as you witness history being made in the Motor City.  There definitely will be dancing in the streets after you leave this show, it’s just so good!