Review: Light Girls—a drop in the bucket of black issues 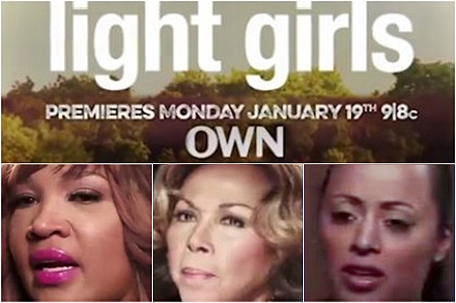 After the success of the OWN documentary and photo book Dark Girls, director Bill Duke has decided to cover a different take on the black perspective in the documentary Light Girls.  Covering a variety of topics that are an issue in the black community, audience members get a glimpse into what it is like growing up with skin of a lighter hue.

It is no secret to any black American that colorism has been a problem for us since bondage, and even centuries later, the pain still resonates through our melanin.  This type of behavior is spawned from self-hate, which was learned by slave masters and mistresses.  Fast forward to 2015, where darker toned women are bleaching their skin to become fairer, and lighter women are tanning to be more sun-kissed.  This kind of mentality is dangerous and downright depressing.  If we cannot accept ourselves first, there is absolutely no way to accept someone who is different from what we see in the mirror.

Now, while I do not consider myself a light-skinned black woman, I still appreciate my sisters of lighter skin because they are black at the end of the day.  With that being said, there were a lot of good things about this documentary including the historical context that colorism has played in our lives for so long (the paper bag test, the one drop rule) and the psychological damage that it has for black women.

I still feel that this is an unfinished piece, grasping at the beginnings of something really good, but not quite there.  A lot of times it circled back to dark-skinned people instead of what it is really like being light-skinned.  It was touched on, but not fully expounded upon which was disheartening.

A lot of celebrity women were interviewed, from comediennes to actresses and journalists offering insight on the pain they have felt throughout their lives living with lighter skin.  The judgments and perceptions they take on simply because they may have a fair-skinned parent. I wish more real- life women were given the opportunity to appear in the documentary because it would have been more relatable. Most of us do not have the experience of auditioning for major roles and being turned away because of our look.  What I did appreciate was the included commentary from our brothers, celebrity status or otherwise.  I’m glad there were men to offer their two cents on some of the things they have heard or believe about light-skinned women, which were not as prominent in Dark Girls. With that being said, there weren’t a lot of intelligent insights these men were offering.  It is important to include all perspectives, but when all the men are pretty much saying the same thing concerning having that ‘trophy light-skinned girl,’ we don’t need to hear it more than twice.  One man was explaining in his experience, darker women take a lot more off of their men than lighter women.  He used the example of his woman serving him, whereas a lighter woman wouldn’t be as servile.  This is a scene that should have been left on the cutting room floor because light or dark, no woman wants to be a man’s servant.  I did appreciate the young Kappa Men stalking about how color shouldn’t matter—does she push you to do better?  That is a much more important quality than whether she can pass the brown paper bag test.

I do not understand why there were so many different comedians and comediennes in this documentary of such a serious subject matter.  Their job is to make people laugh, and this is a time where it distracted rather than added to the discussion, as if to make the audience laugh because this issue is never going away.  One woman said that lighter women got sexually abused more and that is another edit that needed to be made—rape is not a light-skinned issue, it’s an issue period.  And the inclusion of white people in this film was a poor decision.  They haven’t said anything we did not expect them to say—of course you can’t understand colorism, you’ve never dealt with it!  The young musician who was explaining that she does not identify with being black because she feels that she is denying her other cultures made sense to me.  I can relate to that, even though we all know society says otherwise.

Again, this project feels undone.  I wish it would’ve touched more on issues that light women face instead of circling back to issues either all women have or dark-skin shaming.  Yes, darker skinned women are in the story because no one is completely blameless when it comes to colorism, but not all of it spans from dark people bashing lighter hues.  In fact, both of these documentaries just prove that we are a long way from tackling this problem, but it takes us all collectively to remedy the sickness.

The stupidity of Black “colorism”