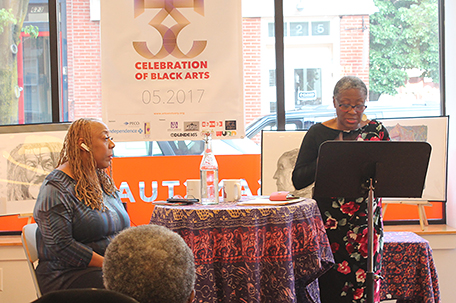 I must admit, interviewing renowned author, professor and co-founder and president emeritus of the Hurston/Wright Foundation Marita Golden was quite the experience. Sitting across from her slender yet commanding figure made me feel lucky yet hesitant, as her femininity and professionalism is that of regality. I felt a great deal of pressure preparing for this moment, as I was told by a mentor and veteran journalist mere minutes before making her acquaintance, “she’s pretty famous, I thought.” and what can I possibly ask this award-winning writer that she hasn’t heard before I even picked up a pencil, let alone chose it as a career path? “These are some of the thoughts I had before entering the doors of the Arts Sanctuary for the reading and presentation of latest novel, “The Wide Circumference of Love,” in celebration of The 33rd Annual Festival of Black Arts.

This book has already received a warm introduction by national publications and authors alike. And based off the first two introductory pages, it is no mystery how that became so. Golden is bosom buddies with the written word–meaning she’s a damn good writer who possesses the power to convey emotion that builds in your stomach and threatens to release itself in waves of tears.

The topic of interest is Diane Tate, esteemed family court judge and devoted mother and wife. Her life is transformed as she finds herself a caretaker of her afflicted husband Gregory, once a mastermind architect, who suffers from early onset Alzheimer’s.

This book opens the door for Blacks to talk about this disease in preventative terms instead of passing it off as an “old folks” disease, as we are at least 50-80 percent more likely to develop symptoms based off our already high rates of hypertension and diabetes and high cholesterol. Research for this work took four years to complete, and in that time, Golden interacted with caretakers, went to memory centers, and talked to numerous doctors and families about their experiences with the disease. While she doesn’t have the trait in her own bloodline, she now knows how to inform others of what steps they can take to delay symptoms.

One doctor she came into contact with was at North Carolina A&T geneticist, Dr. Goldie Byrd. Byrd is conducting research on people who have two or more relatives who have Alzheimer’s and collects blood samples to see if there is a specific trait that causes this life altering ailment. Golden is a wealth of knowledge on the subject of Alzheimer’s and what folks can do to remain well.  This book has led her to work with Maria Shriver, and to write an article for the Washington Post, set to be published June 4th.

When asked about her love of storytelling and words, Golden’s answers led back to early days of reading and asking her father about words.  She says she “came into this world destined to write,” and that her parents were extremely supportive in her efforts to write poetry and prose to answer the questions she had about life and Blackness.  Her gift of words has unfolded through a series of books and articles she has written in her long career, and upon picking up one of her books, you will instantly understand that this sista truly was destined to write.  Golden has a languid, seemingly effortless way of unfolding the story through such beautiful and detailed vocabulary, and you know each word has a specific purpose on the page.  The way she allows her characters to display emotion is like reading true life–even if it is fiction.  Her ability to pull emotion from the reader is just as masterful, and it is easy to see why her words have led her down this journey, as it is almost like watching her produce such revered works in real time.

Golden shared her story with me, and by the end of the interview, I felt I had found a long- lost relative, as her warm spirit was so enduring, and her energy sisterly and amiable. She was honest to the point of being blunt, but laughed it off with a wide smile after, letting me know all was well in her world.

WDAS-FM radio personality Patty Jackson was on hand offering her own line of questions, as she acted as caretaker for her Alzheimer’s-inflicted mother. Watching her read an excerpt to anticipating audience members took me further into the storyline, and hearing the written words through her soft and melodic voice gave the story life.  Please be encouraged to find and read “The Wide Circumference of Love” an endearing tale of love and the struggle it can bear.  It is hard to put down, and by the last page you’ll be a more fulfilled and understanding person hopefully ready to join Marita Golden as an advocate in the fight to find a cure for Alzheimer’s.