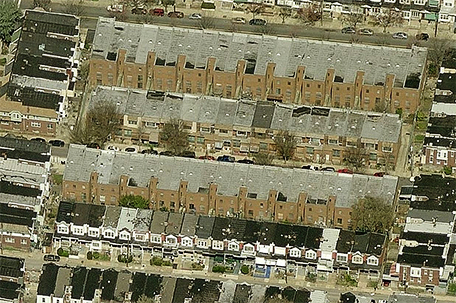 ABOVE PHOTO:  Homes on 6200 block of Osage Avenue  (Courtesy of Bing Maps)

Neighbors on the 6200 block of Osage Avenue are hoping that the Philadelphia Redevelopment Authority can give back what the 1985 MOVE confrontation took away through revitalizing the block.

When he heard that the Philadelphia Redevelopment Authority had issued a request for proposals for prospective developers to come and rehabilitate a section of the 6200 block of Osage Avenue, it was music to Gerald Wayne Renfro’s ears.

“We’re so pleased,” he said. “We’re happy. It’s no fun living on a block with so many homes boarded up.” Maybe we’ll be able to get back to living a normal life again.”

Much of the block– a block that was burned to the ground during the May 1985 confrontation between the City of Philadelphia and the back-to-nature group MOVE– had stood long empty. Thirty-six families took a $125,000 buyout ($150,000 if you needed relocation assistance) from the City of Philadelphia and left their homes after being told that they were unsafe by city officials.

Since then, what was once a quiet, residential space filled with longtime homeowners has had to deal with things it never thought it would.

“We’ve had to deal with drug dealers, squatters, prostitutes and other things,” Renfro said. “Neighbors have gotten mugged. We’ve even had to dodge bullets. There have been shootouts here.”

It was that reality and the desire to heal this long- lasting scar from the MOVE bombing that made Mayor Jim Kenney and his administration issue the RFP, the latest in a long line of City-led efforts to revive the block in West Philadelphia’s Cobbs Creek section, said Jamila Davis, a spokesperson for the city’s Division of Housing and Community Development.

While doing this particular project is important to the Mayor because it repurposes vacant land, it’s even more important because of what the residents of this block have had to go through over the years, Davis said.

Or put another way, they not only want to get this project done, they want to make sure it’s done right.

“We are addressing it now to begin the process of restoration in this community,” Davis said. “PRA’s goal is to ensure that what happened in the previous rehabilitation effort would not be repeated. We want to solicit the best development team for the job that can understand every aspect of the project, and can produce new, quality housing that can make these blocks whole again.”

Making the block whole again has been a challenge for the residents of 6200 Osage and their neighbors since the May 13, 1985 confrontation turned their worlds around.

The residents had come to the city seeking help in dealing with MOVE. The group didn’t have any utilities at the home it occupied at 6221 Osage, which caused problems on the block. Group members also had a tendency to harass their neighbors through yelling at them through a bullhorn and other things.

While they were hoping the city would help them get rid of the problems MOVE presented, none of the neighbors were prepared for what happened, Renfro said.

Eleven people were killed including five children and MOVE founder John Africa. Because the fire caused by the bomb was allowed to burn, 62 families, including Renfro and his wife Connie, watched helplessly as their homes burned to the ground.

“It was a surprise and it was horrifying,” he said. “I never thought that the [Philadelphia] Police Department would resort to such an extreme action, especially with children in the house. We lost mementos…treasures we had hoped to pass down to our children and grandchildren.”

But while watching their home burn to the ground was a nightmare, it was only the beginning.

Mayor W. Wilson Goode condemned the area impacted by the bombing and rebuilt the homes in 1986. Ten years later, Mayor Ed Rendell had the Army Corps of Engineers go in and check the homes due to complaints from residents and the report they issued showed that the homes weren’t up to code.

“The homes were built below code, so Mayor Rendell started to fix them up, replacing the windows and doors,” he said. “Then [Mayor John] Street came in and decided that it was too much to fix them, so he stopped and the city told people that they needed to leave because their heaters were bad and they were going to get carbon monoxide poisoning.”

That’s when the 36 residents took the city’s buyout offer. After the remaining families went to court and new inspectors showed the city that the heaters weren’t damaged, the 16 families that remained on the block were able to stay in their homes, Renfro said.

When Mayor Michael Nutter tried to get the remaining residents to leave their homes through eminent domain, Renfro’s wife Connie took charge, he said.

“She called the Army Corps of Engineers and we talked to about 20 different people before we got the person who did the original report under [Mayor] Rendell,” Gerald Renfro said. “Two of the people came out here unofficially, took a tour of the houses, and found that they were solid. We videotaped the meetings and the Kenney Administration accepted the plan.”

While the city is encouraging the developers to rehab the existing houses, demolition is allowed if it’s the more economical option, Davis said. A condition of the RFP is that the developer adhere to the city’s economic opportunity and inclusion guidelines.