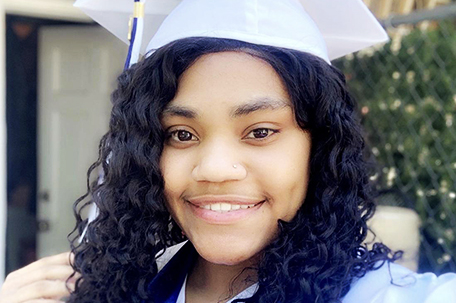 Resilience conquered is a good way to describe the journey of  a young lady named Akashia Hayle.  You have no doubt read, heard or even been in her  shoes.  However, I felt compelled to share this story, as it may have a relevant and positive impact in some lives, which is one of the reasons I reached out to the Philadelphia Sunday SUN to empower its readership of all ages.

Hayle got pregnant at the age of 16 and had a healthy baby girl.  When she found out she was pregnant, the first thing that came to her mind was, “this is the end of my life, because of what I use to hear people say about teenagers.”

According to Mikayla Holmes, “Life is full of changes and challenges and the more resilient you are determines your ability to bounce back and manage.  Ms. Hayle began to “conquer her chaos by building her resilience.”

“I am not going to let anything stop me from accomplishing my goals,” Hayle said. “Although I have not accomplished everything just yet, but I am on that path.”

Another option was for her to go back to Jamaica and depend on her mother for everything.  Hayle’s mother was already taking care of her little sister plus her dad, realizing her returning home would be too much on her mother.

The other obstacle, you cannot get a job in Jamaica unless you are 18 years or older.  She made up her mind to ask her grandma to move in with her, as well as informing her that she was pregnant.  So, the journey started with great relief that she did not have to go back to Jamaica.

Hayle finished 11th grade in Florida and moved to Philadelphia on June 6, 2019 with no plans.  She was just a scared pregnant teenager and wanted to give up on life.  Hope appeared in the form of family support from her grandma and mother guiding her step-by-step, motivating her and telling her that, “This isn’t the end of your life, only if you let it be.”

Fast forward in Hayle’s life, coming to Philadelphia was a really big change.  She now has a welcoming home, surrounded by outgoing community people, and attended Samuel Fels High School.

Hayle got a job at Wendy’s, and worked after school, as well as on the weekends.  It was difficult for her to get up early daily as her belly grew bigger and bigger.  Hayle’s perseverance led her to stop thinking about quitting school and just work. Her goal was to finish school, go to college and get a good job that could financially support her and her baby.

Resilience conquered, Hayle reached out to folks, like her elect counselor, Juanita Streat-Ricchiuti and Dorian Harris, her community liaison, as she continued her education online for pregnant teenagers and immediately signed up for the Philadelphia Virtual Academy.  She stopped working at Wendy’s two weeks away from her due date, only because her feet became too swollen.

Akashia Hayle is so excited to be graduating this June 2020.  She will be attending Community College of Philadelphia (CCP) this fall, , and continue working, while her baby girl will be going to daycare.  Akashia’s village of her grandmother, her mother, Juanita Streat-Ricchiuti, Dorian Harris and the I-LEAD Society’s compassion component of “Adopt A Senior,” all contributed to her “resilience conquered!”