Requiem for a Trailblazer 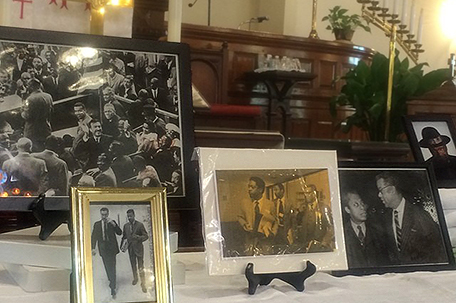 ABOVE PHOTO:  Historical photos featuring a glimpse of the life of columnist Chuck Stone on display at last week’s PABJ memorial at Mother Bethel A.M.E. Church.  (Photo by Denise Clay)

Chuck Stone was remembered for the journalistic trail he blazed and the lives he touched at a memorial service on Saturday.

That the life of former Philadelphia Daily News columnist Chuck Stone was being celebrated at the Mother Bethel A.M.E. Church, one of the oldest African American churches in the country, made perfect sense.

Stone, who went on to be a professor of journalism at the University of North Carolina after leaving the Daily News, had made quite a bit of history of his own.  From the fugitives he brought into the Philadelphia Police Department roundhouse to the organization he helped create, the National Association of Black Journalists, his footprint he left was a large one.

“Chuck Stone was an icon of the city,” said the Rev. W. Wilson Goode, the city’s first African American Mayor. “He was larger than life. His work made the city better.”

A group made up of people representing all aspects of Stone’s life came to celebrate Stone’s life at a memorial sponsored by the Philadelphia Association of Black Journalists, one of the founding chapters of NABJ. Included in that group were fellow NABJ founders and former presidents

“He was so significant in not just the founding of the PABJ – later becoming the founder of the national organization – but he was part of the journalistic fabric in Philadelphia,” he said.

Michael Days, editor of the Philadelphia Daily News, is among those who can count themselves as a part of Stone’s legacy.

Days, the editor of the Daily News, said that without Stone’s vision of an organization that would serve as a place where journalists who were challenged on all sides could recharge their batteries, connect with others who knew their struggle, and get the professional development that they needed to advance their careers, a lot of people, including himself, might have decided to do something else.

“His vision gave us strength and gave us authenticity,” Days said. “Without NABJ I don’t know if I would have hung in there long enough to become a reporter at the Daily News in 1986, nine years after my first convention. Without that vision, without the friends I had made through NABJ and Chuck’s vision, I doubt that I would have risen to become editor of the Philadelphia Daily News. I don’t know if I would have found my voice, or have become comfortable in my own skin.”