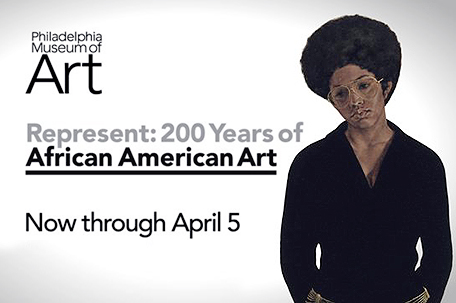 “Represent: 200 Years of African American Art,” is such a grandiose title that people who love black art would want to flock to the exhibit to see hundreds of pieces from famous black artists showcasing black life in America.

But unfortunately the exhibit, which is appearing at the Philadelphia Museum of Art until April 5, leaves a whole lot to be desired.  Because many of the pieces were from the museum’s own collection, many had high expectations…which weren’t met.

Among the problems that some visitors had was where the exhibit was located. The Honickman and Berman Galleries are on the ground floor and many thought this placement was indicative of how the community itself is perceived by the Museum.

“It’s on the ground floor, “ said a Security guard. “You know how they do us.”

While the exhibit features a variety of sculptures, paintings, mixed media pieces, furniture, and photographs, it’s not a very large exhibit. The Philadelphia Museum of Art has more than 800 pieces of African American art in its collection, yet there is barely 100 pieces on display to the public. The question becomes, why?  For all the press that was given to this exhibit, it is not worth it.  A visit to the exhibit’s webpage will show a handful of pieces featured through a trailer, which is almost the equivalent of the installment.

Not only is this disheartening, it is depressing.  Anyone who is an avid black art enthusiast knows of many black artists that can be featured and understands that sifting through any of their catalogues is a hard task. But I believe that if this exhibit were done at an African American art museum, it would have featured more pieces.

The displays of impressionist and European art are filled with great pieces, and yet the work of African American artists is not only in the basement by the gift shop, but is also miniscule? Please! The Philadelphia Museum of Art has to do better with showcasing our contributions to art in this country. Overcoming the oppression of our art is why black art became a thing in the first place.