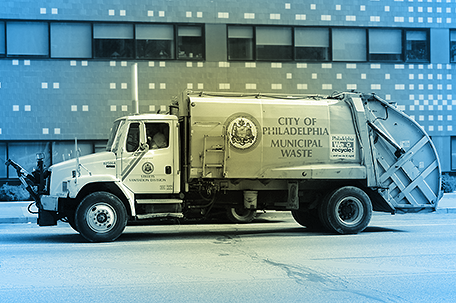 PHILADELPHIA (AP) — Philadelphia’s sanitation fleet has been involved in about 2,000 accidents since June 2015, with two-thirds of the crashes determined to be the garbage truck driver’s fault, according to a newspaper analysis.

The accidents have resulted in dozens of claims and lawsuits that have cost taxpayers $4.8 million over the past five years, the newspaper reported.

Longstanding Philadelphia Streets Department rules mandate that drivers with two preventable accidents in a month, or four within a year, be demoted or fired. Under that policy, 72 of the city’s 500 trash truck drivers should have been demoted or dismissed since 2015, the Inquirer reported.

But the city has not demoted or dismissed any trash truck drivers in recent years, preferring to retrain accident-prone drivers or issue brief suspensions.

Streets Commissioner Carlton Williams acknowledged his department has not followed its own regulations and said “we need to improve.”

“It’s very concerning that if someone gets involved in multiple accidents and there’s no follow-up, that that can lead to future accidents, and that shouldn’t occur,” he told the newspaper. “We have to do a better job in terms of monitoring when those drivers are having trouble, either through training or following up on disciplinary actions.”

Union president Charles Carrington blamed many of the accidents on other motorists trying to speed around the truck or improperly parked cars that block narrow streets.

“It’s like going through a maze,” said Carrington, a truck operator whose union represents the city’s 1,200 sanitation workers.

He said drivers are also told to squeeze up to 10 tons of trash into a truck designed to hold no more than eight, weighing them down and compromising their brakes.

One driver, Allen Williams, had 19 accidents between January 2015 and June 2019, the most of any of the city’s trash truck drivers. Eight of them were ruled his fault. Records show that Williams hit a man in a wheelchair one day and got into another accident the next. He declined comment.

Dia Willams Adams, whose mother’s SUV was hit and totaled by a sanitation truck in 2016, said the city needs to do a better job monitoring its drivers.

“Maybe not get them out of a job, but definitely downgrade them and move them to a different position,” she said. “Because perhaps driving is not their forte.”

Spring has sprung… potholes and trash