Rep. Margo Davidson resigns, after being charged with theft 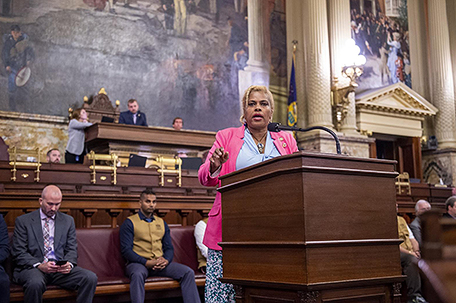 HARRISBURG—Pennsylvania Attorney General Josh Shapiro today announced charges against State Representative Margo Davidson for stealing from the Commonwealth by filing fraudulent overnight per diem requests and various expenses through the State House Comptroller’s Office as well as hindering a state prosecution. She resigned from her position and accepted responsibility today.

“State Representatives swear an oath to use their office for public service — not fraudulent personal gain,” said Attorney General Shapiro. “We will uphold the laws of the Commonwealth without bias, and we will continue to uncover corruption wherever it is found.”

The Grand Jury found that Margo Davidson, 58, requested overnight expenses for nights she did not spend in Harrisburg, and received personal reimbursements from the Commonwealth for expenses that had been paid for by her campaign. The Representative has also been charged with Election Code violations arising from failure to report campaign finance information, as well as soliciting a witness to lie during the course of the investigation.

Representatives are entitled to payments for out-of-pocket expenses during official events and trips. However, Davidson was reimbursed for expenses paid for by her campaign. She was also reimbursed for overnight expenses that she submitted but never incurred at all. Each fraudulent claim resulted in personal profit for Davidson.

The Representative has been charged with misdemeanor charges of Theft, Solicitation to Hinder Apprehension, and Election Code Violations. She waived her preliminary hearing, and has paid the restitution of $6,925.

This case is being prosecuted by Deputy Attorney General James Price. All charges are accusations. The defendant is innocent unless and until proven guilty.