Rep. Evans stunned in the midst of Capitol chaos 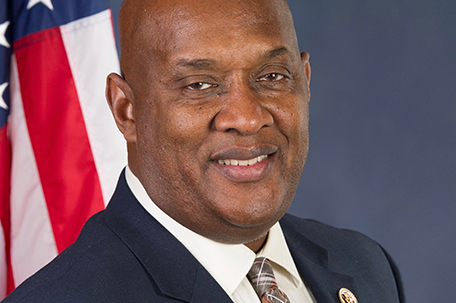 Because of the COVID-19 crisis, and the social distancing required to get through it, not all of the members of the United States Congress were allowed to be on the floor of the House of Representatives on January 6th for the certification of the Electoral College vote that made President-elect Joe Biden’s victory official.

It was that rule that kept Rep. Dwight Evans, Pennsylvania’s lone African American Democratic congressman, from being on the floor of the House when rioters stormed the Capital building and all hell broke loose last Wednesday, he explained.

“I was in the Longworth Building, right across the street from the Capitol and what they told us to do was to stay put in our offices as thousands of rioters surrounded the Capitol building and eventually broke in,” Evans said. “Since the virus was declared a pandemic, for safety purposes we vote in groups. I vote in the second group, so that separated me obviously from the floor of the House and in the balcony where my other colleagues were when everything got out of control. I stayed put in my office until we were given the signal we could come to the floor to vote that evening. It was frightening for everybody, the members and the staff.  I’ve never seen anything like that before, even after all my years of being in politics. It’s unfortunate what we went through.”

“We will manage,” Evans continued, trying to look on the positive side. “The Capitol Police, the FBI and all investigating agencies will find all the people involved with organizing and rolling out the chaos that happened last week. Obviously, this is one of the reasons why I think Donald Trump should go. He was the initiator of all of it. Through his actions and through his words, he fanned the flames of rage and insurrection. Words have consequences.”

Evans also pointed out how sad it was that some congresspersons still refuse to wear facemasks. Three members of the House who were holed up with a group of Republicans that refused to wear masks have since tested positive for COVID-19.

“It’s unfortunate that some of these people take that attitude, because that’s what’s been difficult as we deal with this virus,” Evans said. “I believe once President-elect Biden and Vice-President-elect Harris get in office there will be a new attitude of people working together. We can beat these problems that we have today if we can get people to work together.”

As far as attending the inauguration of America’s 46th president, Congressman Evans says he will be there, however he has a message for others who may have wanted to come and witness the swearing-in.

“I’m encouraging others to stay in place at home and watch the inaugural on television.” Evans said.  “We don’t need thousands of people down there because of safety and because of the virus. I would like to see Donald Trump leave office now. I am in support of the impeachment. It is very clear that Donald Trump does not have the best interest of the country in his actions. This is not about Democrats or Republicans. This is about what’s best for all of our citizens. Ideally, I wish Trump would resign. He needs to get out of the way. We need to move forward.

We have a lot of issues we need to be focused on in addition to the coronavirus. We have to address investments in education. We have to deal with the stimulus checks that so many Americans desperately are in need of right now.”

“The new Congress and the new president who takes office on Jan. 20 begin at a very challenging time for our country – with a pandemic that has caused a recession,” he continued. “I believe that we can work together to meet these challenges and address problems, like the housing crisis, that were already forcing many Philadelphians and people around the country to struggle even before we had heard of COVID-19. I will continue working both for more immediate housing relief and long-term solutions for more affordable housing.I know that gun violence has grown worse during the pandemic, and I will work with my colleagues in the House Democratic majority and President-elect Biden to do more to address that daily tragedy.

The House passed gun reforms in the last Congress that would have made a real difference, but like over 300 bipartisan House-passed bills, they expired without Senate action.”

“I hope the new Senate will be more attuned to the needs of the people on gun violence and other major issues such as voting rights and COVID relief. After four years of Trump, the American people are counting on us to build back better, and I will keep working to do exactly that!” Evans continued.“We have a real opportunity for a fresh start as our nation replaces a chaotic and obstructive president with someone who is serious about working together for the common good and getting things done.

For example, on infrastructure, we can create much-needed jobs and make overdue repairs and improvements to our schools, housing, transit, roads, bridges, water and sewer systems and more. ‘Infrastructure Week’ can and should go from a running joke to reality.”

“Health care will also be a priority for me, he concluded.”  In 2021, we have an opportunity to bring the pandemic under control and crush the virus. I want to see “Operation Warp Speed” live up to its name and get the COVID vaccines out faster so we can resume more of normal life, the sooner the better. And I will work to ensure the vaccines are distributed equitably. I also look forward to working with the Biden-Harris administration to build on the Affordable Care Act to help more Americans get the care they need and to address existing health disparities. Having to deal with an impeachment is a distraction, but we have to do what needs to be done.”