A Reminder of America’s Promise 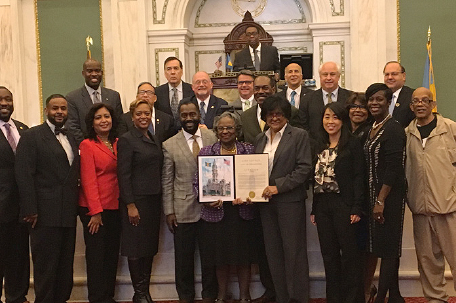 Before she was honored by the Philadelphia NAACP for her contributions to equality, Juanita Jones Abernathy was saluted by Philadelphia City Council.

As we inch closer to Election Day, Philadelphia City Council honored one of the people whose work made voting possible during its regular meeting on Thursday.

Council honored Juanita Jones Abernathy, one of the last surviving members of the Civil Rights Movement of the 1960s, for her continued dedication to America’s promise. She was in town to be recognized by the Philadelphia Chapter of the NAACP at the organization’s annual Awards Gala Friday night.

In accepting the honor, Jones Abernathy, a civil rights pioneer in her own right and wife of the late Rev. Ralph Abernathy, talked about how much has changed since she began her work in 1955 and how much still needs to be done.

To illustrate this point, she talked about the symbols used to honor our country. While she has respect for America, and has even defended the country in her international travels, she also practices her own form of protest, Jones Abernathy said.

“When I was teaching, the kids would stand for the Pledge of Allegiance, but I wouldn’t,” she said. “When someone asked me why, I told him that I’m not going to cross my heart and tell a lie. The Pledge says ‘One nation, under God, indivisible, with liberty and justice for all’, but there is no justice for me. I respect the flag, but until there is justice for me, I can’t do it.”

“America is not what she should be, and that’s what our young people are understanding right now,” Jones Abernathy continued. “None of us are free until all of us are free.”

In other council news, Council passed a resolution calling on Chestnut Hill College to drop the appeal of a recent ruling from the Philadelphia Human Relations Commission.

The resolution, introduced by Councilwomen Helen Gym and Cindy Bass, addresses the appeal filed by Chestnut Hill College of a Philadelphia Human Relations Commission decision finding that the college discriminated against an African American student when the college expelled him shortly before his graduation.

In 2012, Alan-Michael Meads had produced the play “A Raisin in the Sun” with Chestnut Hill’s African American Student Association. Some of the proceeds were to go to the Lupus Foundation, but the school wanted the rest of the money to go into a student vault. Meads used $800 for a cast party and sent $500 to the Lupus Foundation instead.

Administrators claimed that there were more funds unaccounted for, accused him of theft, and expelled him. PHRC found that White students that had committed theft and even violent crimes hadn’t been given the same punishment. Also, despite being less likely to commit crimes on campus, African American students were more likely to be given harsher punishments for infractions, the PHRC found.

Chestnut Hill, a religious-based institution, is appealing the decision, a decision that Council decried by a 14-3 vote. The three no — votes were cast by Republican Council members Brian O’Neill, David Oh and Al Taubenberger.

“The resolution passed today goes beyond the singular injustice of an African American student being denied his degree just weeks before graduation to something much greater,” Gym said in a statement. “The College is refusing to take accountability for Pennsylvania Human Relations Commission findings of racial discrimination and is instead appealing its case to the Commonwealth Court on the basis of religious freedom.”

“Let me be clear,” Gym continued. “No institution, religious or otherwise, has the freedom to racially discriminate. Chestnut Hill’s appeal not only threatens to undermine the civil rights of its own students, current and former, but also the civil rights of thousands of students enrolled in over 50 private colleges and universities across the Commonwealth.We are calling on Chestnut Hill, an institution that accepts state and federal funding for its students, to live up to its own stated ideals of building a loving, inclusive community. Any effort to roll back hard-won civil rights in our city is unacceptable.”

Council also announced the creation of a task force designed to look at retirament security for Philadelphians working in the private sector. The task force, chaired by City Councilwoman Cherelle Parker, will look at ways to ensure that Philadelphia’s workers have what they need to retire when they’re ready. The group will begin holding meetings next month and hopes to unveil short and long-term action plans for Philadelphia’s workers in February 2017.