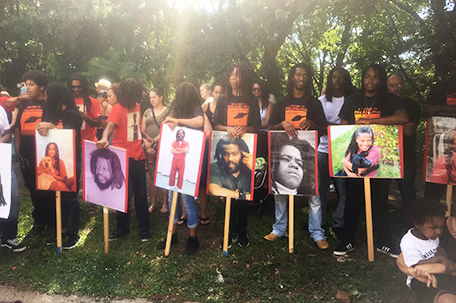 An historical marker commemorating the 1985 MOVE bombing was unveiled on Saturday.

For Philadelphians alive to witness it, the May 13, 1985 confrontation between MOVE and the Philadelphia Police Department on the 6200 Block of Osage Avenue was pretty hard to forget.

The day-long standoff ended with a bomb being dropped on the group’s home at 6221 Osage and the when the flames were finally put out by the Philadelphia Fire Department, six adults and five children were dead, and 61 homes were burned to the ground, leaving a quiet residential block in shambles and hundreds homeless.

A group of students from the private Jubilee School in West Philadelphia learned about the confrontation when studying a unit on police brutality, said Karen Falcon, the school’s founder and principal.

“The students wrote a paper about MOVE,” Falcon said. “They also wanted to go and lay flowers on Osage Avenue on the anniversary of the MOVE bombing. They wondered why there wasn’t a historical marker there.”

At least, that was the case until Saturday.

On Saturday, a group of past and present student members from the K-6 school’s Songs of the Children anti-violence club —Ella Adams, David Bannister, Nigel Carter, Ishtar El, and Hannah Romer — unveiled an historical marker commemorating the MOVE confrontation.

A 1985 MOVE confrontation historical marker was unveiled at the intersection of Cobbs Creek Parkway and the 6200 block of Osage Avenue, where the event took place, on Saturday, June 4th. The marker was the work of students at the Jubilee School on Chester Avenue and their teacher, Karen Falcon. Here they are with Arnett Woodall, who helped the students with the petition that got the ball rolling on the marker. Photo courtesy: Denise Clay

With an audience that included Ramona Africa — the only surviving MOVE member still alive — residents who lived on the 6200 block of Osage Avenue when the confrontation happened, elected officials and MOVE supporters, the children recited poems about the confrontation, shared their road to the historical marker, and listened as people shared their remembrances.

As the lone survivor, Ramona Africa expressed gratitude for their efforts.

“This day belongs to these children,” she said. “They are the ones that made this happen. We love and appreciate them for what they’ve done.”

Michael Ward, who was known as Birdie Africia during the MOVE confrontation, died in 2013 of an accidental drowning. He was 41.

Getting the historical marker together wasn’t easy, Falcon said. When they talked to the Pennsylvania Historical Society, they were told that they had to get a petition signed by the neighbors and raise $1,000.

They started a Go Fund Me account for the $1,000 needed for the marker, and managed to get $500 from State Sen. Anthony H. Williams (D – 8th Dist.), whose district includes the 6200 block of Osage Avenue after raising the first $500 on their own.

For the petition drive, they went to Arnett Woodall. Woodall is the CEO of A&W Community Solutions, Inc. and West Phillie Produce and a longtime community activist. When the children approached him with what they wanted to do, and how determined they were to get it done, he was happy to help.

“They came out every day in the cold to get these petitions signed,” he said. “I’d go to war with them any day.”

Councilwoman Jannie Blackwell (D-  Dist.3)  remembered being at work on May 13 with her late husband Lucien, the district’s councilman at the time. He was called away from the 6200 block of Osage as the confrontation dragged on.

Right now, the memorial doesn’t have a permanent home. Currently, the debate centers on whether or not the marker will go on the block itself.

Blackwell vowed to solve this problem.

“I’ll use all of my power as a political official to make this happen,” she said.

Gerald Renfro, 6200 Osage’s block captain, hoped the marker could be used as a teaching tool.

“[The MOVE confrontation] should be taught to the children of this country,” he said. “It shouldn’t be swept under the rug.”

In addition to poetry from the children, those gathered for the unveiling were treated to music from Kindred the Family Soul, and poetry from Sonia Sanchez and Ursula Rucker.

Then, the veil was lifted from the monument and people happily surrounded it.

For MOVE member Pam Africa, the memorial was not only a symbol of hope, but alo proof of something the group’s founder, the late John Africa, often said.

“Our children have chance to understand what happened, so that they won’t make the same mistakes,” she said. “John Africa used to say that the power of truth is final. This is what he said made manifest.”