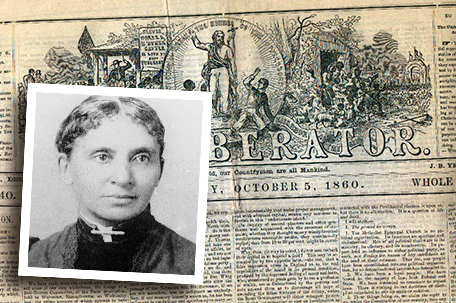 The Moonstone Arts Center this month is celebrating the 100th anniversary of the death of Charlotte Forten, a 19th century free woman of color, whose professional accomplishments and Civil War era writings are nothing short of extraordinary.

The week- long observance begins March 8 and will feature some of the area’s most well known authors and scholars as well as films, lectures and symposia.

Charlotte Forten was born Aug. 17, 1837, in Philadelphia, PA. She kept a diary of her involvement with the abolition movement and became the first African American hired to teach white students in Salem, Mass. In 1862, Forten participated in the Port Royal Experiment, educating ex-slaves on St. Helena Island, South Carolina and recorded her experiences in a series of essays. She died in 1914.

Educator, writer and activist, Charlotte Forten was born into a wealthy and influential African American family. Her diaries chronicle the social and political issues of the times—the fight to end slavery, the Civil War and the state of race relations.

Her grandfather, James Forten, made a fortune with an invention that assisted sailors with heavy sails. He was an outspoken abolitionist and supporter of William Lloyd Garrison’s antislavery publication, The Liberator.

“The Education of Black People” A discussion with Allan Ballard, Michael Coard, Esq. and Camika Royal