Remarks By The President At NAACP Convention 2015 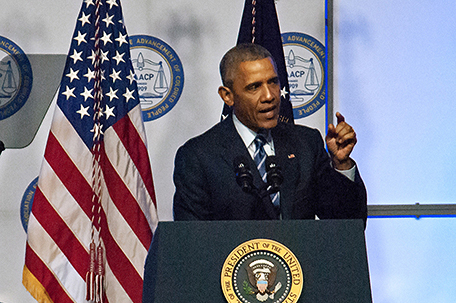 ABOVE PHOTO:  President Barack Obama gives his address to the NAACP Convention at the PA Convention Center, July 14, 2015.  (Photo by Bill Z. Foster)

AUDIENCE MEMBER:  We love you!

THE PRESIDENT:  I love you back.  You know that.

So, see, now, whenever people have, like, little signs, you all got to write it bigger, because I’m getting old now.  (Laughter.)  And I like that picture of me.  That’s very nice.  Thank you.

Let’s get something out of the way up front.  I am not singing today.

THE PRESIDENT:  Not singing.  Although I will say your board sang to me as I came in for the photograph.  (Laughter.)  So I know there’s some good voices in the auditorium.

Let me also say what everybody knows but doesn’t always want to say out loud — you all would rather have Michelle here.  (Laughter.)  I understand.  I don’t blame you.  But I will do my best to fill her shoes.  (Laughter.)  And she sends everybody her love.  And Malia and Sasha say hi, as well.

For 106 years, the NAACP has worked to close the gaps between the words of our founding that we are all created equal, endowed by our Creator with certain unalienable rights — those words try to match those with the realities that we live each and every day.

In your second century, we’ve worked together to give more of our children a shot at a quality education; to help more families rise up out of poverty; to protect future generations from environmental damage; to create fair housing; to help more workers find the purpose of a good job.  And together, we’ve made real progress — including a My Brother’s Keeper initiative to give more young people a fair shot in life; including the passage of a law that declares health care is not a privilege for the few, but a right for all of us.

Part of this is a legacy of hundreds of years of slavery and segregation, and structural inequalities that compounded over generations.    It did not happen by accident.    Partly it’s a result of continuing, if sometimes more subtle, bigotry — whether in who gets called back for a job interview, or who gets suspended from school, or what neighborhood you are able to rent an apartment in — which, by the way, is why our recent initiative to strengthen the awareness and effectiveness of fair housing laws is so important.    So we can’t be satisfied or not satisfied until the opportunity gap is closed for everybody in America.  Everybody.

But today, I want to focus on one aspect of American life that remains particularly skewed by race and by wealth, a source of inequity that has ripple effects on families and on communities and ultimately on our nation — and that is our criminal justice system.

Now, this is not a new topic.  I know sometimes folks discover these things like they just happened.  There’s a long history of inequity in the criminal justice system in America.  When I was in the state legislature in Illinois, we worked to make sure that we had videotaping of interrogations because there were some problems there.  We set up racial profiling laws to prevent the kind of bias in traffic stops that too many people experience.  Since my first campaign, I’ve talked about how, in too many cases, our criminal justice system ends up being a pipeline from underfunded, inadequate schools to overcrowded jails.

What has changed, though, is that, in recent years the eyes of more Americans have been opened to this truth.  Partly because of cameras, partly because of tragedy, partly because the statistics cannot be ignored, we can’t close our eyes anymore.  And the good news — and this is truly good news — is that good people of all political persuasions are starting to think we need to do something about this.

So let’s look at the statistics.  The United States is home to 5 percent of the world’s population, but 25 percent of the world’s prisoners.  Think about that.  Our incarceration rate is four times higher than China’s.  We keep more people behind bars than the top 35 European countries combined.  And it hasn’t always been the case — this huge explosion in incarceration rates.  In 1980, there were 500,000 people behind bars in America — half a million people in 1980.  I was in college in 1980.  Many of you were not born in 1980 — that’s okay.  (Laughter.)  I remember 1980 — 500,000.  Today there are 2.2 million.  It has quadrupled since 1980.  Our prison population has doubled in the last two decades alone.

Now, we need to be honest.  There are a lot of folks who belong in prison.    If we’re going to deal with this problem and the inequities involved then we also have to speak honestly.  There are some folks who need to be in jail.  They may have had terrible things happen to them in their lives.  We hold out the hope for redemption, but they’ve done some bad things.

Murderers, predators, rapists, gang leaders, drug kingpins — we need some of those folks behind bars.  Our communities are safer, thanks to brave police officers and hardworking prosecutors who put those violent criminals in jail.

And the studies show that up to a certain point, tougher prosecutors and stiffer sentences for these violent offenders contributed to the decline in violent crime over the last few decades.  Although the science also indicates that you get a point of diminishing returns.  But it is important for us to recognize that violence in our communities is serious and that historically, in fact, the African American community oftentimes was under-policed rather than over-policed.  Folks were very interested in containing the African American community so it couldn’t leave segregated areas, but within those areas there wasn’t enough police presence.

But here’s the thing:  Over the last few decades, we’ve also locked up more and more nonviolent drug offenders than ever before, for longer than ever before.    And that is the real reason our prison population is so high.  In far too many cases, the punishment simply does not fit the crime.    If you’re a low-level drug dealer, or you violate your parole, you owe some debt to society.  You have to be held accountable and make amends.  But you don’t owe 20 years.  You don’t owe a life sentence.    That’s disproportionate to the price that should be paid.

As Republican Senator and presidential candidate Rand Paul has said — (laughter) — no, and to his credit, he’s been consistent on this issue — imprisoning large numbers of nonviolent drug offenders for long periods of time, “costs the taxpayers money, without making them any safer.”

Roughly one-third of the Justice Department’s budget now goes toward incarceration — one-third.  And there are outstanding public servants at our Justice Department, starting with our outstanding Attorney General, Loretta Lynch — (applause) — and we’ve got some great prosecutors here today — and they do outstanding work — so many of them.  But every dollar they have to spend keeping nonviolent drug offenders in prison is a dollar they can’t spend going after drug kingpins, or tracking down terrorists, or hiring more police and giving them the resources that would allow them to do a more effective job community policing.

And then, of course, there are costs that can’t be measured in dollars and cents.  Because the statistics on who gets incarcerated show that by a wide margin, it disproportionately impacts communities of color.  African Americans and Latinos make up 30 percent of our population; they make up 60 percent of our inmates.  About one in every 35 African American men, one in every 88 Latino men is serving time right now.  Among white men, that number is one in 214.

The bottom line is that in too many places, black boys and black men, Latino boys and Latino men experience being treated differently under the law.

What is that doing to our communities?  What’s that doing to those children?  Our nation is being robbed of men and women who could be workers and taxpayers, could be more actively involved in their children’s lives, could be role models, could be community leaders, and right now they’re locked up for a non-violent offense.