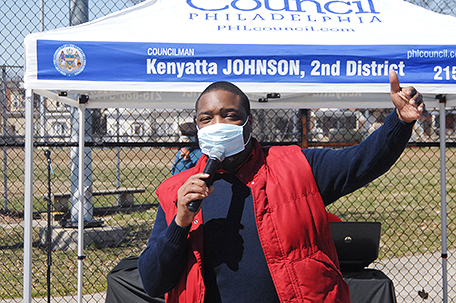 When the City of Philadelphia’s recreation centers aren’t even safe from gun violence, what happens to our young people?

As of press time, 111 people have been killed in the City of Philadelphia, most of them by young people shooting other young people.

These shootings have literally happened everywhere, including the city’s recreation centers. On March 11, Kahree Simmons was shot and killed while playing basketball at the A.W. Christy Recreation Center at 55th and Christian Streets in Southwest Philadelphia. The next day, the Francis Myers Recreation Center at 58th and Kingsessing was the scene of the crime as a 17-year-old boy playing basketball at the center was shot to death.

As he had most of the summer, City Councilmember Kenyatta Johnson gathered grassroots activists, politicians and others who might be able to provide some assistance together for a Peace Not Guns rally at Myers Recreation Center on Saturday.

The idea of the rally was to let the residents know that they weren’t alone, and that there were people nearby who cared about the issue.

“When we come out and do things like this, we give the neighbors a sense of hope,” Johnson said. “We know it’s an uphill battle, but we shouldn’t treat this kind of thing like it’s normal. This is a call to action.”

And many of the activists brought action items. The creator of the Philly Truce app, an app designed to solve conflicts between people before they become violent, was there to tell people how they could participate.

Jon McKay talked about his organization Life Outside the Streets and its goal of creating a security company that would help hire Black owned security companies to make places like Myers Recreation safer.

“You have to create a safe space outside of schools and hospitals,” McKay said.

All of things are nice. And they make sense.

But what do you do until then?

The summer is coming, and one of the things that we can do in a city that’s still in the grip of a fairly nasty pandemic is go outside and get some air. Kids will want to go out and play on weekends after spending months indoors all day due to COVID-19. People will want to sit on their front porches and feel the sun against their faces.

There will be fireflies in Fairmount Park waiting to be chased around and put into jars filled with grass.

And all of those activities will have an unnecessary air of danger due to Philadelphia’s unchecked gun violence.

While I appreciate the fact that Mayor Jim Kenney has decided to have bi-weekly press briefings to let the public know what the city is doing to fix this problem, it’s going to take more than just an earnest effort to make folks feel comfortable enough to feel like warmer weather isn’t going to lead to mass carnage.

It’s going to take the city showing all of us that the Roadmap for Safer Communities is actually being followed.

Because if that doesn’t happen, the blacktops on a lot of the city’s recreation centers are going to be empty this summer. And that’s not fair to the children.

If you’d like to help McKay with Safety for Philadelphia, his project to provide security for the city’s recreation centers, he has a GoFundMe account set up. Here’s the link: https://www.gofundme.com/f/safety-and-security-for-philly.