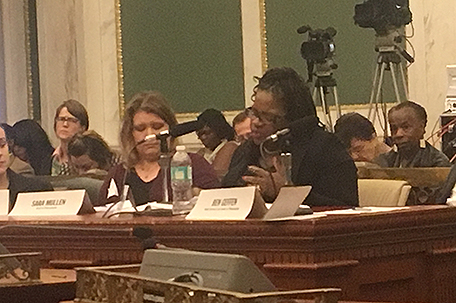 Area officials, advocates, and stakeholders discuss challenges to the system as it stands and how it can be changed going forward

The 2016 Presidential Election exposed flaws in the system designed to insure free and fair elections in the Commonwealth of Pennsylvania and beyond.

Add possible foreign interest and voter access issues such as ID requirements, outdated registration processes, challenges to early voting and more old school forms of intimidation, and you have a perfect storm that puts an already fragile electoral process under more strain.

The goal of the forum was to find the problems now so that they can be taken care of, Hughes said.

“We hope to get clarity on any problems that have occurred in recent Pennsylvania elections,” he said. “These include the recent revelation of the Russian attempt to hack Pennsylvania’s election system. We will also examine local and national attempts to block people from voting, get an update on efforts to increase access to voting, and secure additional support for the voter access package of bills introduced in Harrisburg.”

The package of bills includes HB101, which calls for same day registration; HB1117, calling for early voting options and HB1145, which would allow pre-voter registration for 16-year-olds.

After each presentation, the elected officials approached the panelists with questions, concerns, and ideas.

There are 99 voter suppression bills pending; since 2011, 120 such bills have passed, Arnwine said.

Deceptive practices and voter intimidation are at an all-time high, exacerbated by modern technology, affecting millions of voters around the country.

“We also now have to deal with bots and ‘blackvists,’” she said.

These are 31 forms of voter suppression, Arnwine said. Among them are interstate crosscheck, voter ID laws, and lack of early voting. 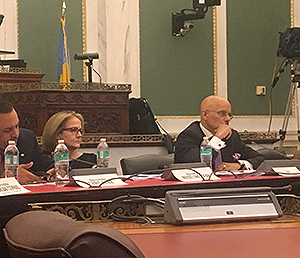 African-Americans take advantage of early voting opportunities 70 percent of the time. Another insidious form of suppression is voter purges. The current administration has made mandatory purges one of their goals, she said.

The practice of “voter caging” is another one of the suppression techniques Arnwine discussed.

Voter caging is the practice of sending mass direct mailings to registered voters by non-forwardable mail, then compiling lists of voters, called “caging lists,” from the returned mail in order to formally challenge their right to vote on that basis alone, according to Project Vote.

There has also been deliberate polling site reduction in recent years. There are over 1,000 fewer polling sites in the country since 2014. As a result, African-American voting has been reduced by 50 percent, Arnwine said.

Ray Murphy of Keystone Votes gave an overview of their report, “Lost and Late in 2016: Why Thousands of Pennsylvanians Weren’t Able To Cast a Ballot at Their Poll on Election Day.”

During the group’s research, Keystone Votes collected stories from organizations around the state who provided voter assistance during the 2016 election season about lost registrations forms or those that were simply not processed, despite being turned in before the deadline.

For example, in Philadelphia, out of 83 completed registration forms submitted on behalf of potential voters by Penn Law American United Constitution Society, 13 were not processed. Out of the 13, four of them were rejected due to data processing error. The other nine were lost.

The current Pennsylvania voter registration program was established 80 years ago, based on the postal system. As many as 2 out of 10 paper registration forms are lost through this process, Murphy said.

When asked about some solutions to the system’s many problems, Murphy said that one step legislators could take would be to provide funding for technology updates and the hiring of temporary staff for county election offices during busy seasons, especially in presidential election years.

City Commissioner Lisa M. Deeley gave an overview of just what her office is up against in high volume election years like 2016.

On October 11, 2016 — the deadline prior to the presidential election — 47,232 paper and over 30,000 electronic voter registration forms were received, Deeley said.

One of the reasons for this the paper volume is because when applicants are often told as they fill out the forms during outreach campaigns and voter registration drives that they should receive a voter registration card within 10 days. Concerned about not being allowed to vote, they often fill out duplicate forms while waiting for the card to arrive, she explained.

Also, although they are collected over a period of months, the forms are often batched and turned in all at once – a significant portion of which are submitted on the deadline date.

Because Philadelphia’s volume is not comparable to any other in the Commonwealth, Deeley would like to coordinate batch submissions so that they can all be processed in a timely and efficient manner. Improved technology, legislative measures, civics classes and mock elections at the high school level, and general voter education were also discussed.

Voter access and integrity in the electoral process are equally important, Pedro Cortes, former secretary Pennsylvania Dept. Of State said during his presentation. Days after the forum, Cortes resigned unexpectedly amidst allegations of undocumented immigrant voting under his watch due to a glitch in the system, although no official reason for the resignation has been given.  Gov. Tom Wolf has appointed Robert Torres — who previously served as the lead deputy secretary for the Secretary of the Commonwealth — as interim secretary of state.

Sen. Hughes expressed his concerns to Cortes regarding an expansion of the electronic voter registration program without first addressing technological vulnerabilities that might allow for a successful infiltration of the state’s current system, especially given recent reports concerning Pennsylvania’s voting machines during last year’s election.

The report stated that there was a thwarted attempt to infiltrate the Commonwealth’s system by Russian agents. The effort was also made in several other states — all states which proved to be critical to the Trump victory.

Hughes said that he would like a full hearing to explore what happened. He is also concerned about the timing of the disclosure of this information – almost one year later.

Although the state was targeted, no actual hacking occurred, Cortes said. He explained that what occurred was a scan of the system, likening it to what happens when a burglar cases a house prior to a robbery, checking doorknobs and windows to see if they could get in.

Tools — including those given to the Commonwealth from the Dept. of Homeland Security from former DHS Secretary Jeh Johnson during the Obama administration — are being used to address the problem, he said.

Voter access for legal immigrants was also raised as a topic of concern by several present during the discussion. Cortes indicated that the form is now available in fourteen different languages and the questions regarding legal eligibility have been reordered to avoid confusion.

There were also points made by several present indicating that much improvement is needed around poll worker training, availability of translators who can speak more than one dialect within a language, and in poll worker interaction with the communities they serve.

The topics of voter access for the disabled and seniors were raised by panelists and elected officials several times during the forum. The absentee ballot process frequently used by this constituency was cited as being flawed and in need of reform. The need for early voting and more accessible polling places for those who wish to vote in person were discussed as possible ways to address these issues.

Sarah Mullen, associate director/advocacy & policy director for the ACLU of Pennsylvania spoke about how convicted felons are often not informed about their voting rights after release. She also spoke about some of the challenges facing transgender voters — such as name and gender changes — and the need for education for those who interact with them at various stages of the electoral process.

Rep. Morgan Cephas (D-192nd Dist.) and Rep. Chris Rabb (D-200th Dist.) touched upon the issue of millennial voters and their fundamental importance in elections as the voting population ages.

An increased focus on social media and other technological campaign platforms such as apps, as well as encouraging other millennials to run for public office were also mentioned as vital steps in increasing participation.

Hughes said that he plans on holding similar roundtable discussions in the future.