Recalibrating our lives at this year’s Philadelphia Flower Show 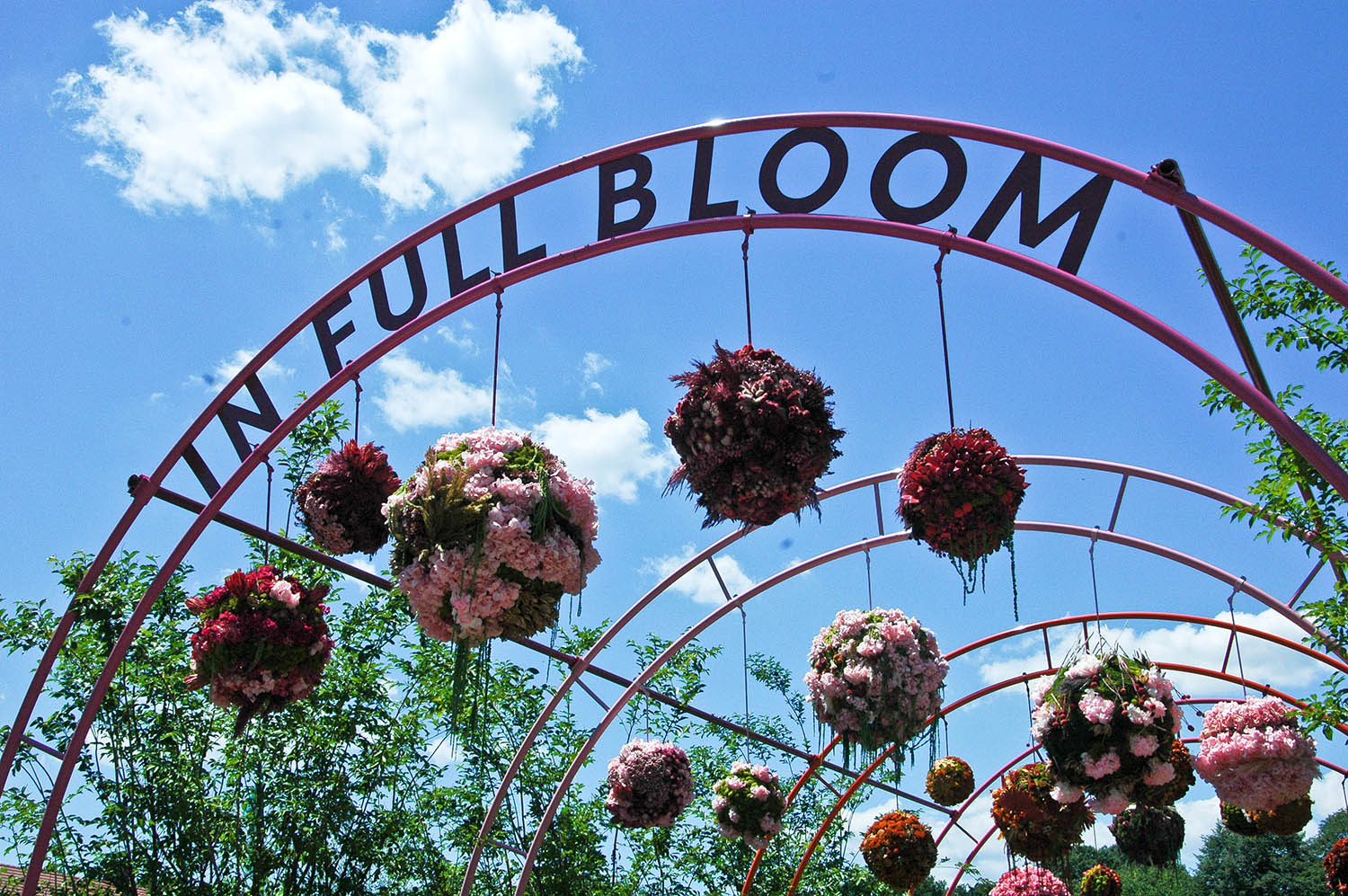 If there is one catchphrase that is being used as the world enters year three of the pandemic, it is “the new normal.”

It has multiple meanings, depending on its context — sometimes it is used ruefully, others with a sense of future possibilities.

The latter has taken precedence at the 2022 Philadelphia Flower Show, the second time in its history that it is being held outdoors in FDR Park in South Philadelphia.

This year’s show theme is “In Full Bloom.” It examines nature’s restorative power and its impact on physical, mental, and emotional well-being as people continue to recover from one of the most significant events in modern history.

Last year’s show was one of the first major public events to return in the region. Because it had never been done before, there was a learning curve. That said, there was evidence throughout this year’s event that planners took feedback from its 2021 outdoor location debut — both positive and negative — to heart.

One major improvement was to the show’s general layout. Traffic patterns were smoothed out and pathways were widened to promote better crowd flow. Strategic seating placed throughout the show also helped with flow control and the comfort of attendees.

In addition, a substantial number of smaller garden spaces are featured, including educational gardens, with a nod to urban gardeners and others who discovered the benefits that even a container garden can bring to one’s peace of mind during the pandemic.

Upon entering the show grounds, volunteer Desiree Whitaker immediately felt that peace as she interacted with the public, who also seemed to be enjoying nature’s tranquility. It resonated deeply with her faith.

“I base this on Genesis — you know, the first chapter when it talks about how God created the heavens and the earth,” she said. “So to be able to see the trees, flowers, nature and water. … it’s just so inspiring.”

An activist and life skills consultant, Whitaker, a native of Mt. Airy, said that her parents taught her not only to appreciate flowers, but also to respect the entire planting process. Like many Philadelphians, she grew up going to the show. Although she loves the original venues it has been held in, she has enjoyed the outdoor setting as well.

One thing the pandemic has taught everyone is that although the world can change, it can still be okay, she said. After over two years of loss and isolation, she and many others feel gratitude, as evidenced by the beauty of the exhibits this year.

“I feel a spirit of gratefulness,” she said.

The Marketplace, always a centerpiece of the show, was expanded to include many new vendors among those who have had a presence there for decades. And why not? In addition to being a tradition, the Flower Show is also a bridge to the future.

“Just recently all my aunts came up and they were so happy they saw me at the Flower Show,” said Tanika Casimir, owner and operator of Philadelphia-based Elizabeth Peyton Creations, a natural skincare and soy-based candle business she founded in 2017. “[To go from] just going to the flower show, and now being a vendor here a big deal for them.”

It made Casimir feel like a superstar, she added with a laugh.

Casimir’s online and pop-up-based business is named after her beloved late mother, Elizabeth, and a young girl she worked with while in the event planning business, Peyton, to whose spirit she relates. This was her second year as a Flower Show vendor. Although foot traffic was varied, she was able to sell out of at least one of her signature candles, which burn for up to 70 hours and are lightly scented. She also sold out of some of her sugar-based facial scrubs.

Ippolito’s entry this year is entitled “Aer.” The garden — which features a spiraling gazebo-style structure adorned with colorful flowers — offers a peaceful and tranquil respite from everyday stresses, from the delicate agapanthus blossoms to the rustic wooden lounge chairs. The display earned her a 2022 PHS Bronze Medal in the Landscape category.

Ippolito welcomed the opportunity to participate in this year’s show without feeling the pressure to compete like she did last year, but instead to create a beautiful garden on her own terms, she said.

“I think when you do something that’s true to you, it resonates with other people who are on that same vibration,” she said.

Ippolito has been busy since last year’s honors. A trip back to Kenya not only rejuvenated her, but also provided inspiration for this year’s exhibit.

“That helped me with my palate, because I was able to see many colors that I hadn’t seen in a while and see their different combinations, [as well as] see how communities work, so that helped me in my design,” she said.

Ippolito’s family is proud of her Flower Show achievements, and she is proud of herself, as well as humbled and thankful. Show participants share a certain comradery, and they inspire each other, she said.

“This type of thing is always about learning and seeing what other people are doing,” she said.

Auburn University’s entry in the Landscape Major Exhibit category, titled “Mixed Shades, Much Joy,” won four awards, including the PHS Philadelphia Flower Show Gold Medal, The Philadelphia Trophy, The Bulkley Medal of the Garden Club of America, and a Special Achievement Award from the Garden Club Federation of Pennsylvania.

A total of nine students from Auburn’s landscape architecture program worked on the project under the guidance of instructor Abra Lee, her organization, Conquer the Soil, and David Hill, associate professor and graduate landscape architecture chair of Auburn University College of Architecture, Design, and Construction. The school is located in Alabama.

The garden was inspired by Philadelphia-born Harlem Renaissance writer and naturalist Effie Lee Newsome’s children’s poetry book entitled “Gladiola Gardens.” Released in 1941, it was the first book known to have been written with African American children in mind. Newsome was also an editor for W.E.B. Dubois in “The Crisis” magazine. She was the daughter of the legendary Bishop Benjamin F. Lee, former president of Wilberforce University.

“A little boy, a little girl, I think of you because you are many colors, too,” one of the lines in the book reads.

“She’s referencing how the many colors of Blackness are equal to the many colors of things, like a Gladiola flower,” Lee, no relation to the late author, said. “So just imagine that — lynchings are going on in the South and just [general] strife in America, but she’s saying, ‘nothing matches your beauty except for nature.’ So it was that level of uplift that she gave children in that time, and that’s what the garden is about.”

“There’s an incredibly rich, Black Garden history, right here in Philadelphia,” Lee added. “So many stories, so much greatness.”

Within the exhibit, Lee and the Auburn University team placed windowed structures through which visitors can read lines of poetry placed among some of the flowers Newsome included in her book.

Jerri Lee Mitchell, the late author’s niece, was on hand along with other family members when the awards were presented last Friday. Mitchell remembers her aunt, who died in 1979, well.

She was absolutely certain that her Aunt Effie would have loved the garden exhibit that her work inspired, and that the garden reminds her of Newsome.

“The garden is beautiful. I’m really pleased,” she said. “I think she [Newsome] would be very happy with it.”

The culinary area of the Flower Show has also been redesigned and expanded for 2022. It offers a healthy selection of traditional, vegetarian, and vegan choices at a reasonable price. Among the offerings are a 300-seat pop-up restaurant called The Lakes, which features classic bistro fare from Brûlée Catering.

The restaurant at FDR Park’s boathouse, a focal point during the 2021 show, has returned with a full-service bar and casual seating overlooking the park’s scenic lake.

There are 18 vendors at the Food Bazaar, in addition to the two restaurants, so there are foods for every palate. There are vegetarian, vegan, and international items, as well as well-known favorites.

Other food vendors located throughout the show include Dillonades refreshing lemonade and Dre’s Water Ice and Southern Style Ice Cream, both owned and operated by local young entrepreneurs.

A picnic table seating area under an amply shaded canopy helps enhance the food experience by allowing guests to enjoy their meal while listening to live music from a centrally located grandstand.

For an additional fee, visitors can participate in hands-on floral crafting activities led by local artisans in the new Artisan Row tent, including fresh floral crowns, personalized candle making, dried floral arrangements, and botanical jewelry. The venue offers beautiful garden-style seating areas, as well as a bar and lounge where guests can enjoy drinks in an atmosphere that fosters creativity.

Young children sometimes become restless during the Flower Show, which is mainly geared toward adults. The all-new Kids Cocoon & Play Space is the perfect remedy. It features story times, gardening-inspired crafts and interactive play structures. One of the highlights of the area is the popular Butterflies Live exhibit, which is a crowd favorite.

There is also a cozy and shaded area in the center of the cocoon, with benches, kid-sized and full-sized seating made from logs, as well as strategically placed picnic tables and space to run around.

There is much to experience at this year’s show — much of it taking place both before and after official show hours. The 2022 Philadelphia Flower Show — after tentative baby steps in the first days of the post-lockdown period last year — is indeed in full bloom.

Whether it returns to the Pennsylvania Convention Center next year or not, visitors will not forget the lessons of the past two years. Cliche or not, one of those lessons is that there is more benefit in literally taking time to smell the roses — and to tend to them — than they could have ever dreamed of before.