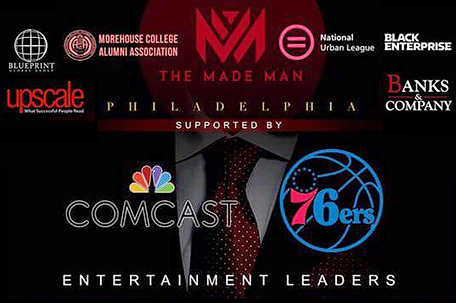 The Made Man event connects men who have made their mark on Philadelphia with those who want to follow in their footsteps.

For Maxwell Brown, the road to becoming a Made Man began in ‘the hole.’

Brown, who served in the Mayor’s Office of Community Service during Mayor Michael Nutter’s administration, was in prison for murder. A violation led to his being put in solitary confinement for two years.

It also gave the Philadelphia native and motivational speaker a chance to think about his life and the anger that seemed to have taken control of it.

“I was abandoned as a kid,” Brown said. “My mom took me to the police station and left me there. I figured that if my mom didn’t want me, why would anybody else? I thought that intimidation equaled respect. I realized I was my own worst enemy.”

Coming to that realization and moving forward from that, is at the center of what Brown says to the young people he works with.

Next Friday, Brown will be among the 50 Black men recognized by the organization The Made Man, as one of Philadelphia’s 50 most distinguished business leaders, community leaders, and entertainers.

It’s an honor that he never expected, he said.

“It’s a tremendous honor,” he said. “To be from Philadelphia and be recognized by my city for something positive is humbling.”

Next Friday at 6pm, The Made Man will honor some of the city’s influential and up and coming leaders with a reception at the Comcast Center, 1701 JFK Blvd.

It’s been a while since the organization has been to Philadelphia, but the nationwide event has honored Black men across the country for the impact they’ve had on their communities, said Ky Dele, Made Man’s executive director.

The idea behind the organization is connecting established leaders with both those who are starting to make an impact and those who may have been written off, Dele said.

“We want to get them all in one room so that they can connect and share their positive energies,” she said.

Community organizations, professional groups, and individuals nominated the honorees, Dele said. When nominations were announced, Made Men was flooded with the names of men who have distinguished themselves in their chosen professions and in the community.

It’s a response that Dele wasn’t surprised by. In fact, it proves that the organization’s other mission — improving the image of Black men in the community — shouldn’t be necessary.

“When people say to me that they don’t know any good Black men,” she said. “I don’t know what they’re talking about.”

In addition to the Friday night reception, the honorees,which include City Councilman Curtis Jones, State Sens. Vincent Hughes and Anthony H. William; Keaton Nichols, host of WURD’s “The Lounge” and Rock and Roll Hall of Famer Kenny Gamble, will participate in mentoring activities and a suit drive designed to help men in search of employment make a good first impression.

Tickets for The Made Man reception are $50 and can be purchased at www.TheMadeMan.org.

The Made Man is a collaboration between the National Urban League, 100 Black Men, the Morehouse College Alumni Association, Black Enterprise Magazine, Upscale Magazine, and Banks and Company.

Comcast and the Philadelphia 76ers are sponsoring the reception.