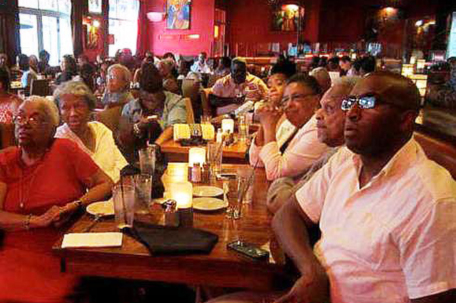 “If you want to hide something from a black person, put it in a book.”

No one knows the author of that now infamous statement, but we’ve all heard it, and many of have cringed when we did.

Of course it’s not true; but if proof is needed to show the fallacy of the statement, it’s the large number of African American book clubs that exist across the nation. Groups of people who get together to not only read, but to discuss what they’ve read and share opinions.

“Being in a book club has exposed me to a great number of books that I never would have otherwise read, and meet people whom I met never have otherwise met,” said Shirley Coker, president of the Philadelphia chapter of Go On Girl Book Club, an organization that boasts more then thirty chapters nationwide.

Coker’s chapter includes women of all ages and social economic levels – the only common denomination being their love for books. “It leads to great conversations and great fellowship,” she said.

Edward Cohen, president of Brothers and Sisters Book Club agrees. His club has members as young as 20, and as old as 80.

“Since the club is so diverse, the meeting and book discussions can sometimes be lively,” he said with a laugh.” Lively, and sometimes heated, but nothing is taken personally.”

Cohen is an avid reader, but also scrabble player, and often played with a group of people which included neighbor, and co-founder of the book club, Marsetta Lee.

“Whenever we got together to play we’d wind up talking about books that we were reading, the themes, the good and the bad,” said Cohen who was living in Trenton at the time. “Then someone said we need to start a book club.”

The first meeting occurred in 1995, and the first book was Brothers and Sisters by the Bebe Moore Campbell. There were 12 people at the first meeting, and one of the things they decided was that all of the books they read would be by African-American authors.

“The general public doesn’t seem to realize that African-American writers need additional support. When they list books on the New York Times Best Sellers List, you seldom see African American books, though there are some excellent African-American authors,” explained Cohen, who now lives in South Philadelphia.

The New York Times Best Seller’s List is based on the number of books bought in a particular week. Cohen adds that the African American community has enough economic power to get good African-American books on the list, but don’t.

“A lot of us support the white authors not realizing we are not supporting our own,” explained Cohen, adding that group wanted to become part of the solution rather than add to the problem. “So we decided that we give them our support.”

And African American authors acknowledge that they have benefited from the support.  Kimberla Lawson Roby self-published her book, “Here and Now,” in 1997 and met with book clubs in her hometown of Rockford, Illinois, and eventually around the country, to get the word out. And it worked. People started talking about the book and about having met the author. Roby landed a huge publishing deal with a major publisher, and is now a New York Times best selling author.

“Book clubs have been a huge blessing to me and my writing career for years, and it is the reason I visit with as many of them as possible,” said Roby, whose new book, A Christmas Prayer was published earlier this month.

“It’s my way of giving back to book clubs for making such an amazing and incomparable difference in my life.”

Eric Jerome Dickey is another author who was pushed to the New York Times bestseller’s list through the help of book clubs.

“If it weren’t for book clubs, I would never have had a career. The word-of-mouth promotion we get from them is more powerful than the ads taken out by the establishment for other writers” said Dickey, whose latest book is “A Wanted Woman.” “If t wasn’t for book clubs, most authors from my community would be dead on vine.”

“Putting out a new book is a daunting task so when you get 10 to 12 people who love your book it’s like hitting a jackpot,” said Frisby, a former staff writer for The Philadelphia Daily News. “Because while there may only be a dozen women at the book club, these women then go to work, and tell people how much they love the book, and loved meeting the author.”

The snowball effect led to Frisby being offered a publishing contract from Penguin Books, which also published his second book, “Wifebeater.”

Frisby, who also wrote the acclaimed book, Holla Back: But Make Sure You Listen First, said that he has maintained his contacts with the book clubs, and uses them as test readers – sending them chapters of the new detective story he is writing.

Ashley Richardson, of Mount Airy, started Women Reading for Wisdom Book Club in September. Their first book was Dusty Crowns by Heather Lindsey, and the next book on their agenda is The Art of Activation, by Lucinda Cross.

“It started as something informal, a few of my friends and people they invited,” explained Richardson, 26, a native of Mount Airy.

But book clubs aren’t something exclusive to adults. The Overbrook Park Teens Book Club meets twice a month at the Overbrook Library, and read a variety of books that deal with the subjects adolescents deal with in real life.

“It’s been a great experience for me,” said Erykah Raleigh, 16, a sophomore at Girls High School. “I’ve been reading since I was six, and it’s good to interact with people my age who like to read, and see how they feel about what we’ve read.”

Each member of the group, which started in 2011, takes turns selecting a group read. Raleigh said her turn is coming up next, and she is considering offering up, Pinned, by Sharon G. Flake.

Raleigh and other members of book clubs are living proof that African-Americans do read, and seem to live out the motto of Black Nationalist leader, Malcolm X.

“Read absolutely everything you get your hands on because you’ll never know where you’ll get an idea from.”