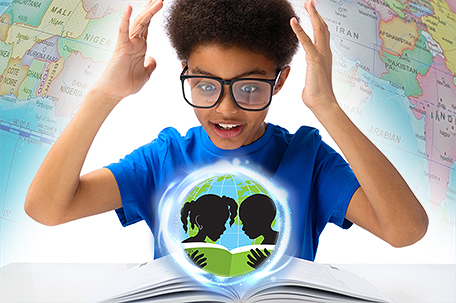 At the 27th annual African American Children’s Book Fair, children get the chance to explore the world through reading.

When it comes to turning children into readers, it’s about giving them choices.

Because of this, Vanesse Lloyd-Sgambati has spent the last 27 years giving children access to as many books, authors and illustrators as possible through the African American Children’s Book Fair. Understanding what children want to read helps them form a love of reading, she said.

“Reading, the whole process of reading, is about choice,” Lloyd-Sgambati said. “If you like mystery books and I like romance books, I’m not going to read it if you give me a mystery book. But if you give me a romance book, I’ll read it. You have to give kids books about things that are of interest to them. For example, if a child is interested in cars, give him a book about cars and he’ll want to read it. Then, he’ll want to read more books.”

This year’s fair, which takes place on Saturday from 1pm-4pm at the Community College of Philadelphia, will feature a group of award-winning, internationally known children’s book authors to share their creations, including Kwame Alexander, Lesa Cline Ransome, Nikki Grimes and G. Todd Taylor.

In addition to opportunities for children to buy books, NBC-10-Telemundo 62, one of the book fair’s sponsors, will be giving away new books for children while supplies last, Lloyd-Sgambati said. Publishers will also be there to provide teacher’s guides and books for teachers (with ID) that can’t afford to get extra reading material into the hands of their students otherwise, she said.

Connecting authors to the children who are interested in reading their books has been the mission of the Children’s Book Fair since its inception, Lloyd-Sgambati said. While hundreds of books are published each year, few of them are still in print because publishers can’t operate at a loss.

In the name of helping both Black children and Black authors, Lloyd-Sgambati decided that something had to be done about that.

“I wanted to introduce consumers to authors and illustrators,” she said. “There are a lot of great books that haven’t gone out of print because we’ve let people know about them. Authors come to the book fair and are invigorated by seeing Black children buying their books.”

About 3,500 people are expected to come through the book fair, Lloyd-Sgambati said. This year, the fair will feature projects related to icons. The daughter of one of those icons, Susan Roberson, will come to the fair to talk about her book “Grandpa Stops A War”, which tells the story of her grandfather, Paul Robeson, and how his singing to soldiers in the Spanish Civil War calmed the conflict.

The Pennsylvania Academy of Fine Arts, another sponsor, will be presenting a workshop, and there will also be a workshop on knitting.

“It is a labor of love,” she said. “This is all positive. It’s a group of people wanting the best for their kids.”

The African American Children’s Book Fair will be held in the gymnasium of the Community College of Philadelphia, located at 17th and Spring Garden Streets, from 1pm-4pm on Saturday. The event is free and open to the public.

For more information on the fair, go to http://www.theafricanamericanchhildrensbookproject.org.