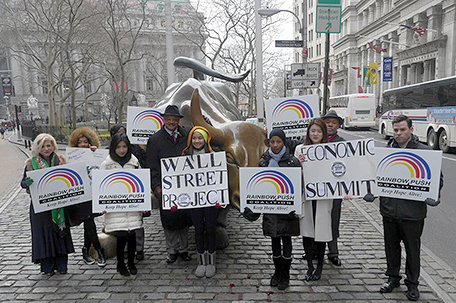 Rev. Jesse Jackson fully understands that the Philadelphia Eagles are now in Minneapolis preparing for their team’s first Super Bowl appearance since 2004 against the defending NFL champs, the New England Patriots.

But he believes that the championship that the City of Brotherly Love should be vying for is the one for “Most Improved Business Climate For Black People.”

In other words, the Eagles are filled with Black millionaires. The city that roots for them should be too. In a city with one of the nation’s highest poverty rates, it’s time to prioritize, Jackson said.

“I realize that Philly still has Super Bowl on the brain, but there are other things to consider,” he said. “Recently, I have been flying over Philadelphia, Washington, DC, New York and Los Angeles. You don’t see any skyscrapers owned by Blacks or with Black names on them. The few that wanted one had to go through (extensive) credit checks and show all their credentials.”

This is just part of the Rev. Jesse Jackson’s message for Philadelphia and why locals should attend the Rainbow PUSH Coalition and Citizenship Education Fund’s 21st Annual Wall Street Economic Summit at the Sheraton New York Times Square Hotel in in New York City this week. 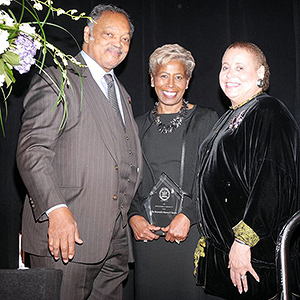 Beginning with a Town Hall meeting on Wednesday, Feb. 7, the summit will bring entrepreneurs, business owners, policymakers and the unemployed, or underemployed together to seek new opportunities in business. The summit ends on Friday, Feb. 9.

The theme of this year’s summit is “50 Years after the Assassination of Dr. King: The Struggle Continues for Freedom, Equity and Inclusion in Corporate America” and it will include sessions on a variety of topics ranging from private equity investments, board diversity, and minority procurement to the best ways to use the new technology to start a business.

On Wednesday, the Rainbow PUSH Coalition will focus on its “One Thousand Churches Connected” initiative designed to get economic development started in communities with the churches as a hub; Thursday afternoon will feature the “Diversity in Business Awards Luncheon” hosted by Diversity, Inc. and on Thursday evening, the Wall Street Project Scholarship Gala will be held.

“Blacks are entrepreneurial and many families try to start businesses,” Jackson said. “What stops them is a lack of access to capital.”

“While Whites can get startup funding based on their ideas, Blacks are considered more risky to investors and thus have to rely on loans based on a combination of credit and collateral. This reality puts Blacks on the so-called “fourth rung” of the economic ladder. The other three rungs were enslavement, Jim Crow laws, and a lack of access to the voting booth.”

“That last one made electing people who advocated for Black economic empowerment almost impossible,” Jackson said.

Philadelphia’s African-American community should be fighting for assurances that all get all of the money owed for their pensions, especially those who work in the government, Jackson said. He pointed out that these resources, along with life insurance policies, have provided “seed money” for many African Americans to build wealth and open businesses.

“Philadelphia, like many cities, has been grappling over these pension funds,” Jackson said. “Many Black businesses have started with pension fund dollars. The city, state and federal pension dollars were invested in things like the stadiums that you see right there in South Philadelphia. They were invested in real estate growth that may have gentrified neighborhoods where Black people lived, and there were hedge funds investments. This was the worker’s cash that was invested. Then when it’s time to get those funds in the way of business loans and other investments, they are saying they are not available.”

So, at this year’s summit, Jackson will present the case for those whose pension or other investment dollars went to banks that are now redlining the city.

“They want those pension funds because that is the money Black people have invested,” Jackson said. “Some of these same Black people whose money went to bail out the banks cannot get credit or access capital to open a business. We have to demolish this. This [is] why this is our fourth major hurdle—access to capital, including our own capital.” 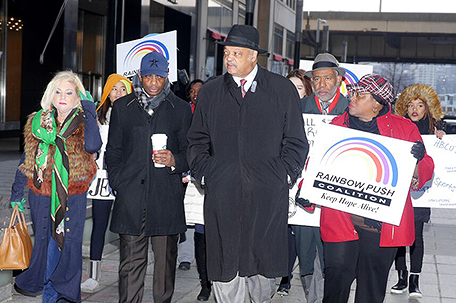 Jackson said that he is aware of the many redevelopment and economic development plans for Philadelphia. Earlier this week, the Philadelphia City Planning Commission held its first public meeting, entitled “Philadelphia 2035: Upper Northwest District Plan.” The session drew an overflow crowd to the United Lutheran Seminary in Mount Airy. The new district’s northern boundary is Stenton Avenue.

“A lot of city plans, in cities like Philadelphia, are about bringing in resources that go around us,” Jackson said. “This is the new scheme of gerrymandering around us. They are doing this politically, so they can gentrify neighborhoods with these zones.”

When you look at the maps of the zones, [they surround] or leave out the zip codes where we live,” Jackson continued. “They draw the line in such a way that the business capital will not reach the neighborhoods where we are the majority. Then the other neighborhoods where some of us still live gets a gentrifying plan that will make living there or owning a business there so expensive we will eventually be moved out.” Jackson realizes that not all in the African-American community want to own a business. Many want the issues of unemployment and underemployment — as well as worker’s rights to organize — on the table. Yet he pointed out that African-American businesses tend to hire African-Americans; certain government programs also provide employment.

“As a result of the policies of [former President] Barack Obama, unemployment has gone down in the Black community,” Jackson said. “We have more Blacks working in healthcare after Obamacare. When you talk about eliminating CHIP, it does not just affect families as far as health insurance, but it impacts jobs in our community.”

We still have too many who are among the poor and working poor, in cities like Philadelphia,” Jackson continued. “It got better after the last recession, because it was far worse just before that. Many jobs are still paying so low that many have jobs, but are still in slavery. They have no (resources) after they pay their housing. This means they cannot invest or start a business.”

Jackson insisted that he meets many from Philadelphia who express the desire to become an entrepreneur. He said that it is a misnomer to even suggest that African-Americans do not have an entrepreneurial spirit.

“They should not say something is wrong with our spirit to start a business,” Jackson said. “We have to say there is something wrong with the banker’s spirit. A Black person could spend 30 years in a teaching career and then want to open a business, but then you can’t get funding. These are the things that need to be exposed and addressed now.”