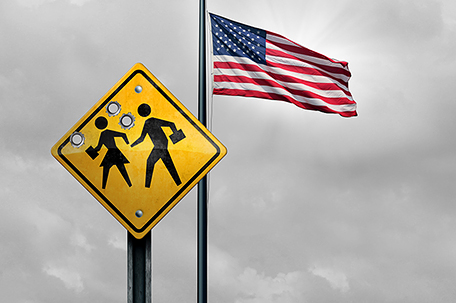 Delaware County District Attorney Jack Stollsteimer issued preliminary findings in the investigation in what he said was an attempt to be transparent.

He said investigators had determined shots were fired on the street outside the football stadium, with at least one fired in the direction of three Sharon Hill police officers who were monitoring the crowd as it left the game. The officers returned fire, Stollsteimer said, likely striking four members of the crowd.

“Tragically, our investigation has now determined that there is a high probability that the responsive gunfire of the Sharon Hill Police Officers struck four victims, including the shots that killed 8-year-old Fanta Bility and wounded her sister,’’ Stollsteimer said in a written release.

Stollsteimer said he met with Bility’s family Thursday. He also renewed his call for information on who fired the initial shots outside the game and at the officers. No arrests had been made as of Thursday.

Several phone calls to the Sharon Hill Police Department were not answered Thursday afternoon. The officers, who have not been named, are on paid administrative leave, the Sharon Hill council said in an emailed statement.

The council also said it will hire an outside firm to investigate and ensure police department policies were followed and whether its procedures “are at the forefront of community policing.’’

Sharon Hill borough is a small community of about 5,700 residents less than 2 miles north of Philadelphia International Airport.

Borough administrators did not return emails asking whether the three officers were on duty or working an off-duty security shift at the high school.

Officials said the gunfire erupted shortly before 9 p.m. Friday near the main gate to the football field at Academy Park High School shortly after the conclusion of the game between Pennsbury and Academy Park high schools.

Pennsbury said in a statement that none of its players, staff or coaches were injured. The school said players were evacuated safely and met by counselors.