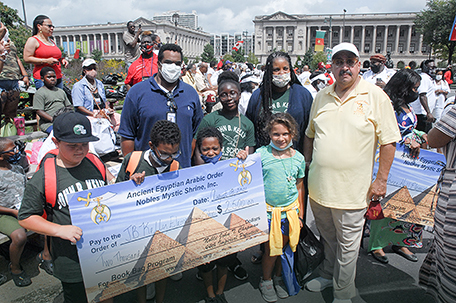 In 1969, John T. Chapman began a relationship with the Masonic order when he joined the Star in the East Lodge #55 of the Most Worshipful Prince Hall Grand Lodge of Pennsylvania. Five decades later, he would be elected to the Office of Imperial Potentate of The Ancient Egyptian Arabic Order Nobles Mystic Shrine (A.E.A.O.N.M.S.), the organization’s highest office.

Chapman’s rise to the top office can be attributed to his years of service to the organization. He has held many leadership positions, including  Worshipful Master at least twice, and as president of its Past Master Council for a number of years.

He also holds membership in all male bodies of the Masonic order and was elevated to the 33rd degree of Scottish Rite Masonry in 1999, receiving coronation as a Sovereign Grand Inspector General in 2014. He served as a board member of the Prince Hall Grand Lodge Temple Association for 12 years, four of which he served as its President.

It was in 1993, when Chapman was elected Illustrious Potentate for the Shrine’s largest temple, Pyramid No. 1. From this position, he began his climb, which was a 20-year journey of dedicated leadership and service to A.E.A.O.N.M.S. of North and South America and its Jurisdictions. He was elevated to the supreme rank of Imperial Potentate 2020.

During the course of the 2021 A.E.A.O.N.M.S. Annual Convention, which was held in Philadelphia, Chapman was honored during a Testimonial Banquet commemorating his leadership and service to the organization. Chapman was born in New York City and raised in the section of Philadelphia called “Pulaskitown.” He also is a life member of the Wissahickon Boys Club, the first and oldest African American Boys Club in the nation.

The career path pursued by Chapman includes work in the chemical industry. However, he was later hired by the City of Philadelphia to work with troubled youth. He would then join the School District of Philadelphia where he served in various leadership capacities for more than 40 years until his full retirement. Chapman pursued a second career in construction as managing partner and COO of TP McSween Painting Contractors, one of the largest minority union paint contractors in the area. He also is a member of Kappa Alpha Psi Fraternity Inc.

In his private life, Chapman is married to Kelly Ann Murray Chapman and has two children — Jennifer, who is an attorney, and Jason, who is an executive with Boston Scientific. He also is the grandfather of two granddaughters.

He is a member of Enon Tabernacle Baptist Church, where he is active in the church’s ministry for male mentoring.

In addition, Chapman continues to serve as a consultant to the School District of Philadelphia on issues related to instructional improvement and executive leadership development.