Pretty in Purple: Komen Philadelphia’s ‘Race for the Cure’ to Feature “Forever Fighters” 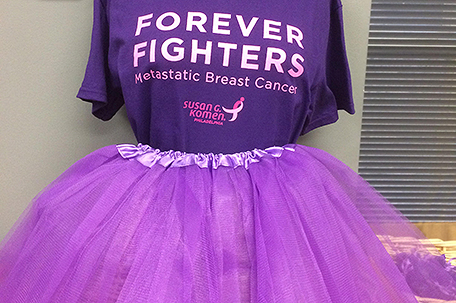 ABOVE PHOTO:  T-shirts and tutus for the “Race for the Cure” event.

“Why are you still alive? Why didn’t the cancer kill you?”

Felicia Johnson – who was first diagnosed with MBC in 2003, and triple negative breast cancer in 2010 – gently wiped away tears as she recalled the first time someone asked her this incredibly insensitive question. It wouldn’t be the first time.

“People look at you, they make their assessment, and say ‘Well, you’re healthy —what’s wrong with you?’ Johnson said. “They ask ‘Why are you tired? Why are you lying down? Why do you have so much pain? It could even be people in your family [asking these questions].

The disclaimer is that you’re out of official treatment, [at least] the heavy portion of your cycle of treatment. You are still in treatment, and it appears not to be so devastating…over time, the empathy changes.”

For the younger women in the group, [the question is] ‘will I have children?’ When my mother was diagnosed in 1974, she lived in that parameter of the five-year window of survival rate, but things have changed.”

The Komen Philadelphia “Race for the Cure” is introducing a new element into its Parade of Pink on Sunday, May 14th: women and men who are members of the metastatic breast cancer (MBC) community. Metastatic breast cancer patients are often misunderstood, because as they journey through the disease process – which can last over a decade — there are periods when they do not appear ill at all.

Johnson, 58, is the 13th woman in her family who developed metastatic breast cancer. As an African American, she – like her late family members – was already demographically at risk, as are all women of color. She will readily admit to having attended one funeral too many on this painful journey. Some days are a bridge too far. Despite it all, she is determined to focus on the future – and to encourage other members of the MBC community to do the same.

“We have challenges, but we are living, so this is an opportunity to raise our voices and let it be known that we’re here, we’re thriving, we’re fighting…we are ready to meet those challenges as a collective group,” Johnson said. 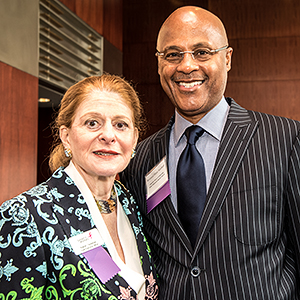 Those affected by MBC prefer to focus on living rather than on the disease process – working, laughing, loving and growing. Therefore, they consider themselves not to be mere “survivors,” but “thrivers.”

They’ll have their own tent, along with their own “Forever Fighters” tee-shirt and banner at this year’s Race for the Cure on May 14th in Philadelphia. There will be information and other items available, as well as physicians, committee members and others to answer questions.

Their aim is to literally come out of the shadows, raise awareness and garner support.

“They will march adjacent the survivors; there will not be a split, where no one can walk down the middle; they’ll be side by side in the procession,” said Komen Philadelphia’s Outreach Education Coordinator Bernadette White.

White’s game-changing involvement in the organization is nearly as old as the 27-year-old “Race for the Cure” itself. When Komen Philadelphia barely had any staff nor supporters, she was working for Hahnemann Hospital in the Department of Radiology when Susan G. Komen Philadelphia CEO Elaine I. Grobman approached them to see how they could work together. White identified women in need of mammograms, diagnostic services and at times, breast cancer treatment, and the two women arranged for grant money to help serve those women.

“We [Hahnemann]were the first ones on board with Komen years ago,” White recalled. “Hahnemann had no money at the time. When Elaine came to us, my immediate director said, ‘Bern, I want you to deal with these women and help them.’ I thought to myself  ‘are they crazy? Hahnemann has no money, this woman [Grobman] is saying she has no money.’’

Despite the challenges they faced, White and Grobman worked together, along with other key players, and were able to set up a grant program within a year.

“The women who benefitted the most were African- American women” said White. “These were women who were not sitting at home watching soap operas, or waiting to collect a check from the city, not that there was anything wrong with women who had small children and had to do that.

But these were working women. They didn’t have any health insurance, and had gone to ask for help, but were asked questions like ‘Are you married? Do you have a husband? How much money do you have in the bank? Do you own a house?’ When they came to me, I said, ‘That’s not right; her life is in jeopardy, she came in with a [suspicious]lump, and you’re asking questions like that?’

I would call Elaine and say ‘this woman needs money for a biopsy,’ and Elaine would reply, ‘How much do you need, and when do you need it?’ The money would be sent by courier within an hour. It was the beginning of a fruitful partnership between the two women.

After leaving Hahnemann, White was volunteering at Komen when Grobman asked her to join the staff full time. She agreed, and became the organization’s Outreach Education Coordinator. Together, they also helped spearhead the organization’s groundbreaking MBC initiative nearly two years ago.

“It was [initially]Elaine’s idea, “White explained. “We’d get in very early before the rest of the staff got here. One morning, we were sitting and having coffee, and were talking about the metastatic breast cancer community – those who don’t really have a voice, or those who have a voice, but are not prepared to use it, for whatever reason. She [Elaine]said that there’s got to be something else that we can do for them, beside the research piece and what we were already doing to reach out to them. We decided that we would do a monthly meeting.”

“I initially got an email saying that there was going to be a metastatic committee at Susan G. Komen and would you like to join,” Felicia Johnson remembered. “Yes, yes, yes! Tell me when, tell me when!’ I replied. It [the committee] is a group of women who are at various places in the metastatic journey, and what Komen has offered us is a place to join, to bring multiple ideas on how to support this community.” 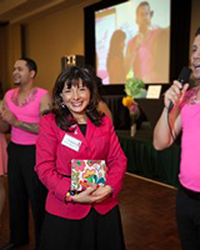 Among those who will be honored posthumously in the “Forever Fighters” tent and march will be Vivian Ortiz, a Komen Philadelphia MBC committee member, and enthusiastic “thriver.” Ortiz was a huge supporter of Bernadette’s efforts to bring this community out of the shadows and to educate the public about the disease. Sadly, her battle ended on the same day that this interview took place.

While she has a special place in her heart for all the patients she has been honored to serve, White and Ortiz developed a close bond. Ortiz and Johnson were also very close, and chatted regularly about everyday things that were not cancer-related.

“She (Ortiz) was a loving, gentle, beautiful spirit who fought the uphill battle to survive,” White reflected tearfully.

White also emphasized the need for people to register for the Race for the Cure, which is Komen’s main fundraiser. Unfortunately, most people who show up that day just come for the fun, free gifts and food and esprit du corps – which is fine, but misses the point if they do not contribute financially to this cause – a decision that could be the difference between life and death for thousands of people.

There are even several ways to support the Race that does not require one’s physical presence, including virtual participation, sponsorship and much more.

Praise Is The Cure Presents the 11th Annual Week of Hope, Health & Healing

Race for the Cure is more than a run