Preserving history in a changing neighborhood 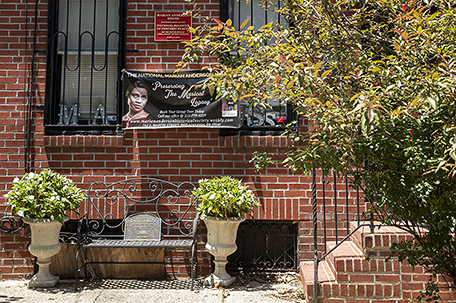 ABOVE PHOTO: The exterior of the Marian Anderson Museum & Historical Society in Philadelphia, is shown Monday, June 28, 2021.  (Monica Herndon/The Philadelphia Inquirer via AP)

Repairing the Marian Anderson House is part of a larger effort to preserve the history of South Philadelphia as development continues.

The area around the Marian Anderson House and Historical Society on Martin Street in South Philadelphia is changing as development brings new residences, shopping areas and restaurants to the area.

But thanks to a couple of sizable gifts, the home of the iconic contralto, whose voice was part of the soundtrack of the Civil Rights Movement, will soon be reopened to the public and be a part of a push to maintain historical places in South Philadelphia.

The Marian Anderson House and Historical Society recently received $100,000 from the City of Philadelphia and $75,000 from the Washington, D.C.-based National Trust of Historical Places to cover day-to-day expenses and to repair damages to the house from when the house flooded in 2020.

Money for the museum came from an allocation in the 2022 fiscal year budget, said Councilman Kenyatta Johnson (D-2nd Dist.), whose district the house calls home.

Because of the place that Anderson holds not only in South Philadelphia, but also all over the city and the world, maintaining a spot that celebrates her presence is important.

Especially since everything around it is changing.

It’s incredibly important that we preserve African American landmarks both citywide and in the district,” Johnson said.

“She used her voice as a platform for social justice, and it’s important that this legacy is maintained in South Philadelphia.”

“Our great Marian Anderson is one of the most important historical figures of the 20th century for her groundbreaking exceptional music artistry and humanitarianism,” said Jillian Pirtle, CEO of the Anderson House.”

We are incredibly grateful that our Councilman Kenyatta Johnson is leading the way in example of support for The Marian Anderson Museum and Historical Society.

We are so thankful that he understands that the Marian Anderson Museum must be preserved, lifted up, and supported now and for our future generations to come.”

In addition to working with the Marian Anderson House, Councilman Johnson is also working to preserve the homes that made up Black Doctor’s Row and is researching landmarks along Lombard Street, and Washington Avenue with the help of the Philadelphia Preservation Alliance.