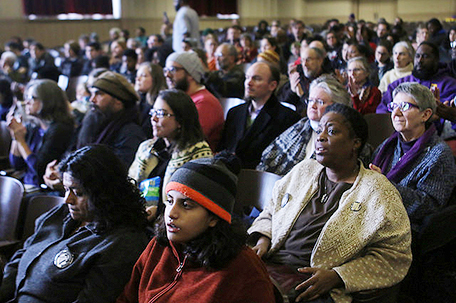 More than 50 years after Martin Luther King Jr’s assassination, his work is far from done. On MLK Day, Monday, January 21, we will carry the torch of King’s anti-poverty, anti-racism work at our teach-in and rally,  entitled “The People’s Congress: Building the People’s Platform.” Join the MLK D.A.R.E Coalition in fellowship at Bible Way Baptist (1323 N 52nd St, Philadelphia) from 1:00 PM to 3:00 PM to contribute to a platform that will hold our elected officials accountable in the upcoming municipal elections and beyond.

Let’s stand together to end mass incarceration, support education and housing for all, create a just economy, steward our environment, and protect immigrants’ and workers’ rights. Together we will build a city that works for everyone and “let justice roll down like water.”

Economic Dignity Strategy Team: As 2019 municipal elections approach, the Economic Dignity Team strengthens its commitment to challenge poverty wages. We will fight state preemption of Philadelphia’s right to raise the wage for ALL City workers. We also stand with Marriott workers in their struggle to choose union representation, and we support the study and implementation of the Philadelphia Public Bank Initiative.

On MLK Day, Monday, January 21, in the hope of building Dr. King’s Beloved Community, we will stage a press conference and nonviolent action at 11:30 AM at the McDonalds located at 29 E. Chelten Avenue in Philadelphia. McDonalds workers DO NOT make a living wage, with some earning only Pennsylvania’s $7.25 minimum. Together with the office of Sen. Art Haywood and the Unitarian Society of Germantown, we invite you to stand with us against this injustice.