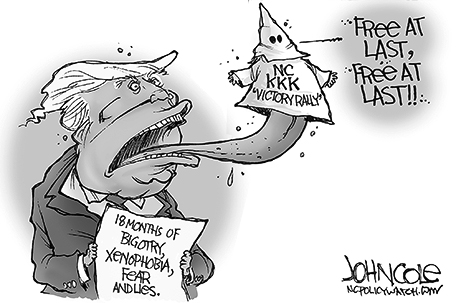 If nothing else, the 2016 Presidential Election showed us that you are, indeed, entitled to your own facts.

By the time I walked out of Temple University’s School of Communications, that particular saying had been drummed into my head. Every professor I had kept telling my classmates and I that if you can prove the facts you’re presenting, you’ll be in good stead.

For most of the nearly 25 years I’ve been a reporter, I’ve lived by that axiom and was pretty confident that as long as I presented facts to the readers of my newspaper articles or the people listening to my radio reports, folks would take that information and do what they needed to make their lives better.

After the 2016 Presidential Campaign, I’m no longer so sure of that, because if I’ve learned nothing else from this particular election, I’ve learned that Americans do indeed feel that they’re entitled to their own facts.

And because of this, the next four years are going to be a test to see what journalism and journalists are made of.

Unless you’ve been hiding under a rock, or are among the people who caused the Canadian Immigration website to crash on Election Night, Republican candidate Donald Trump is now the President-elect of the United States.

Now when I wrote my wrap-up of the elections in Pennsylvania last week, I didn’t really get into how this happened, so I will now. The White working class came out in record numbers for Trump, including 43 percent of White women. He even got 13 percent of the Black male vote and 29 percent of the Latino vote.

(I will now resist the urge to be petty enough to point out that many of these were the same White women that came for the necks of Black women when they voted for Barack Obama over Democratic candidate Hillary Clinton in 2008. Or maybe I won’t. Sorry, not sorry.)

You can blame those results on sexism, which did play a part. While male misogynists are bad, female misogynists are worse. And they do exist. Also, if you listen to 900 AM WURD at any time during the day, you understand why 13 percent of Black men voted for Trump. 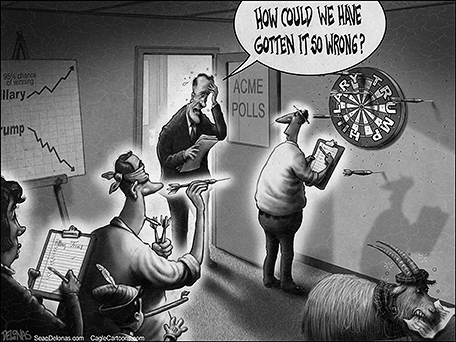 You can blame them on racism, which makes sense when you remember that one of the first people who took to Twitter to cheer the President-elect was former Ku Klux Klan leader David Duke. I mean, hey, the Ku Klux Klan is planning a victory parade for Trump in North Carolina in December, and the Southern Poverty Law Center has been busier than a long tailed cat in a room filled with rocking chairs taking hate crime reports since Wednesday.

But while both of those things played a significant part, I think that one of the biggest reasons that “Hail to the Chief” will be playing whenever Donald Trump walks into a room for the next four years is because we have entered the Post-Truth Age.

Don’t believe me? Let’s take a look at the campaign itself.

At the beginning of the campaign, Trump told reporters that he could probably shoot someone in the middle of New York’s Fifth Avenue and not lose any of his supporters.

While he didn’t shoot anyone, he managed to win despite lying his behind off.

According to the website Politifact.com, roughly half of what Trump told voters during the campaign was false, with 17 percent of what he said scoring the website’s infamous “Pants on Fire” designation. He is also probably the only President-elect we’ve ever who’s due in court for fraud (Trump University.

A complaint who alleged that Trump raped her as a 13-year old, filed a voluntary dismissal in NY District Court on November 4th after receiving death threats.

And let’s keep it real. If someone had sent the media a tape of Barack Obama bragging about sexually assaulting women, or if he had been endorsed by Minister Louis Farrakhan, he wouldn’t have gotten two minutes in the White House, much less two terms.

But not even getting an official endorsement from the Ku Klux Klan could slow the rise of Trump.

And here’s the part that gets me as a veteran reporter. We didn’t find any of the Trump University or sexual assault stuff out until the Republican primaries were over. We knew more about Hillary Clinton’s private email server than we could ever want to know, but much of Trump’s shenanigans stayed hidden.

Because of this, we now have a man coming into the nation’s highest office who knew so little about what he was getting into, that he didn’t realize that he didn’t get to keep President Obama’s White House staff when he leaves in January.

And that knowledge, among other things, should serve as a “Come To Jesus” moment for journalists in general, and journalists from traditionally marginalized communities in particular.

I say this because the only thing that’s going to stand between Americans and Trump’s most grotesque impulses– impulses that the Republican majority in both houses of Congress will certainly indulge– is a robust press. Because the press by and large created this monster, it’s our responsibility to make sure that Godzilla doesn’t stomp the whole city into oblivion.

We’ve got to get much better at our jobs, and I don’t mean just knowing all the new tools. We’ve got to become better researchers. Better reporters. Better investigators. If we see a thread, we need to pull on it and see what’s on the other end.

It ain’t gonna be easy. Trump has shown such an open hostility to the press that his partisans have been encouraged to do such things as wear t-shirts saying “Journalist, rope, tree: Some assembly required.” He’s also been known to leave his traveling press behind and to be honest, I wouldn’t be at all surprised if the White House Press Room was turned into a den during the Trump Administration.

But it’s gotta be done. And that goes triple for the ethnic and LGBT Press. If newspapers like the SUN don’t make sure that our readers know exactly what’s going on with this administration, we’re not going to know what’s coming until it hits us upside the head.

Which brings me to something that I’ve wanted to talk about with SUN readers for a while now. As our regular readers know, I covered the Republican National Convention in July. I had a lot of people ask me why I bothered to get a credential for it.

I got it because I have never lost money betting on the American public to go into a voting booth and do something completely off the wall. Like, for example, elect the former host of “Celebrity Apprentice” President of the United States.

So it’s time for all journalistic hands to be on deck here. Unfortunately, we lost one of our best on Monday when Gwen Ifill of the “PBS Newshour” lost her battle with cancer.

But because of how good a reporter she was, she’d be more than up to the challenge of covering the Trump Administration.

We need to be up for it too.