Politically Uncorrected: Toomey at the Gate 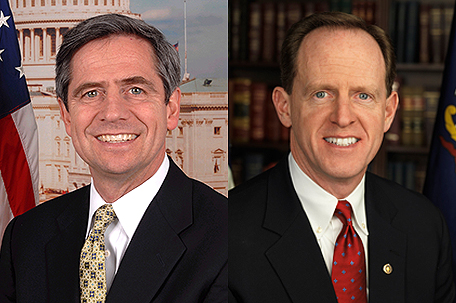 Sen. Pat Toomey (R-Pa) is running for his first reelection since his victory in 2010 probably against Joe Sestak (D). It’s bound to be one of the most interesting U.S. Senate races of 2016.

And one of the priciest. Total spending is likely to top the $50 million raised in 2012 in the costly Bob Casey (D) versus Tom Smith (R) Pennsylvania senate contest.

So, interesting and pricey – but what will make the race one of the most watched in the country are the political stakes. Toomey’s seat is likely to be one of a tiny handful that will determine whether Republicans continue to control the Senate.

It’s close now with 54 Republicans and 46 Democrats. A swing of five seats could throw control of the senate back to Democrats. Two crucial factors make that a distinct possibility: the election will be held in a presidential year which usually brings out a larger Democratic vote; and Republicans have more than twice as many seats to defend (24) than the Democrats (10).

Among the seats up in 2016, Larry Sabato’s widely consulted Crystal Ball rates five of them toss-ups. Toomey’s seat is one of them.

Unsurprisingly, Pennsylvania Democrats are enthusiastic about the prospects of defeating Toomey. Toomey’s win in the 2010 midterm was by a narrow two points, despite running in a year that a powerful Republican wave swept the state.

Moreover, 2016 could be an even tougher task for him with a presidential race at top of the ticket and thousands more core Democrats voting than did so in 2010.

But Democratic enthusiasm might be quixotic. Some early polling shows Toomey with a double-digit lead over likely Democratic opponents.  A squeaky-clean former businessman and former head of the Club for Growth, Toomey is very popular with free-market and anti-tax groups who are going to spend prolifically to reelect him.

Additionally, Toomey’s personal style is neither confrontational nor provocative. His mild mannered and low-key demeanor resonates well with the Pennsylvania electorate. Indeed, it is a style Republicans have won with for decades despite the substantial Democratic voter registration edge in the Keystone state.

True, Toomey is solidly conservative in a state where voters in a presidential year tend to be center-left. Ideologically, he is not in sync with the average Pennsylvania voter.

Were he to allow himself to be painted as a cultural warrior, as for example, former Republican Sen. Rick Santorum did, Toomey could quickly find himself in political quicksand in an election year when cultural issues could come to the fore.

Toomey has largely, and artfully, avoided this. His cultural conservatism is not in doubt. But he has avoided the deeply divisive polarizing cultural fights some conservatives have embraced. On gun control, for example, he co-sponsored a universal gun background check law that found support on both sides of the aisle.

His bi-partisan approach extends to his Democratic counterpart Bob Casey, working cooperatively on many Pennsylvania interests with Casey, despite their substantial ideological differences. This, too, is a tactic that has won for Pennsylvania Republicans for decades.

Then there is the not so minor matter of finding a Democratic nominee who can beat him. That might seem easy in a state with about one million more Democrats than Republicans.

Sestak lost to Toomey by only two percentage points, but Sestak’s maverick style and contempt for the Democratic establishment has alienated him from party leaders.

Pawlowski, who had an abortive run for governor in 2012, cut short by poor fund raising has undercut his appeal among many party leaders.

Democrats are waiting for a candidate who can beat Toomey in the general election. It could be a long wait.

In modern times, Republicans seeking senate seats in presidential elections years have done surprisingly well – despite huge voter registration deficits.  Since the 1960’s, six Republican U.S. Senate candidates have squeaked out narrow victories in presidential years, even while Democrats were winning the state in the presidential contest. Recent examples are Rick Santorum in 2000 and Arlen Specter in 2004.

All in all, the case for Toomey wining a second term in 2016 is stronger than might be expected. In fact, despite the daunting challenge of running as a conservative in a blue state in a presidential year – Toomey’s chances look pretty good.

This is partly due to his own skills as a politician, adroitly mixing an amiable style with his hard-edged conservative ideology. Even more it is the consequence of opposition Democrats’ failure to recruit, organize and fund a candidate who can beat him.

Toomey may ultimately lose in 2016 – and if he does that could mean the GOP loses control of the U.S. Senate. But if he does lose, state Democrats will have to beat him. Toomey won’t beat himself.

Politically Uncorrected: The Costs of Combat