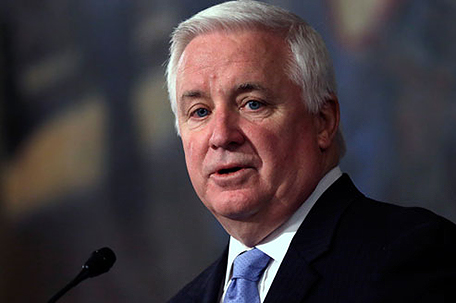 It’s a trite but true political aphorism: “Where you stand depends on where you sit,” meaning we tend to see things differently depending on what perspective we see them from.

If you’re a Pennsylvania Republican, no matter where you “sit,” it’s hard to see what Gov. Tom Corbett did with the 2014-15 budget as anything but a divisive, last-gasp effort to change perceptions of his leadership.

In case you missed it, Corbett, using most of his 10 days to sign or veto the 2014-15, state budget finally decided to do both. He signed it, but excluded about $72 million mostly earmarked for the legislature. This he excised with his line-item veto popularly known as “blue lining.” (A Pennsylvania governor cannot add appropriations to a budget passed by the legislature, but can selectively delete them.)

Corbett wiped out about 20 percent of the money intended to support the General Assembly plus some pet projects. (Before shedding a tear for the legislature be informed that it currently holds some $150 million in “reserve,” more than enough to get it through the year.

Corbett did this to “encourage” the legislature to return to Harrisburg to enact pension reform, his number one priority, and perhaps salvage his swiftly disappearing chances of re-election. (Ignore for the moment that voters don’t care that much about pension reform and list it as their fourth or fifth most important issue. It spoils the story if you worry too much about that.)

To be fair, Corbett was in a bit of a tight corner when the legislature delivered an on time budget sans pension reform. Facing a daunting re-election challenge, he needed some accomplishments.

Still, he had some choices. He could have simply signed the bill, not a great choice because it would make him look weak in the face of the legislatures defiance of his agenda; he could have let the budget become law without his signature, another not so great choice because it would make a politician trying to demonstrate leadership look passive; or, worst choice of all, he could  “blue line” the budget bill, cutting the legislative appropriation and alienating his remaining supporters in the Republican-controlled legislature.

This last worst choice was Corbett’s choice.  He publicly chastised legislators for failing to give him the pension reform he seeks, while enraging many of his own party’s leaders by gutting their own 2014-15 appropriation. For a governor who has been neither bold nor aggressive, this is a bold and aggressive move. In effect, he is declaring war on his own party.

It’s also preface to a political gunfight he seems certain to lose.

First, and foremost, voters just don’t care that much about pension reform. They should but they don’t. And increasingly they think Corbett cannot win reelection; he currently trails his Democratic challenger by more than 20 points.

Second, the legislature can and probably will simply ignore Corbett. They can override his line-item veto with a two-thirds majority or they can live with the cuts, drawing on their ample “reserves” to see them through the rest of Corbett’s term.

Third, the Republican majorities that run the legislature (and we are using the word “run” loosely) simply don’t need Corbett to retain their legislative control or to win in the fall. Probably 90 percent or more of incumbents are now independent political entrepreneurs who look to neither the party nor the governor for continuance in office.

Finally, the legislature simply isn’t going to pass any kind of pension reform this session even close to Corbett’s proposals. The consensus isn’t there; the votes are not there; and the will is not there. It isn’t going to happen.

That’s because in a special session all the legislature has to do is show up. The governor cannot force them to vote up or down on pensions or anything else. They can gavel in, then gavel out and go home, an embarrassment Corbett cannot afford.

Corbett’s dilemma is only partially self-inflicted. Certainly, his leadership style and political skills are not a good fit for the mud wrestling, arm-twisting brand of politics often practiced in Pennsylvania.

But the larger problem exists in the legislature itself. House Republicans are badly split between a militant tea party group and traditional moderates from suburban areas. Moderate Republicans controlling the Senate clash with the more conservative House. And the leadership in both caucuses is no longer able to get together, wheel and deal, and reach compromise on vital issues.

It’s now clear he can’t do that.

Much more troubling is the growing suspicion no one else can, either.