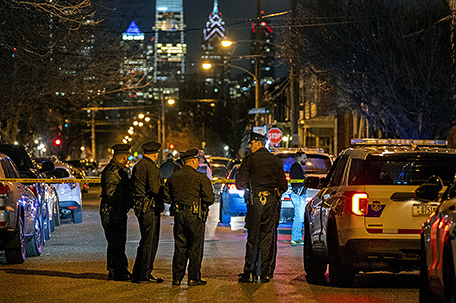 ABOVE PHOTO: Police investigate the scene of a shooting on Tuesday, March 1, 2022 in Philadelphia. An unidentified male teen was fatally shot by police and an officer was injured by shattered glass during a confrontation Tuesday night in South Philadelphia, police said. (Tom Gralish/The Philadelphia Inquirer via AP)

PHILADELPHIA — Philadelphia police said they won’t immediately release the names of plainclothes officers involved in an encounter that resulted in the fatal shooting by an officer of a 12-year-old boy, citing reported threats against the officers as police continue to probe the circumstances of the shooting.

Police said Thomas Siderio Jr. was shot in the back last Tuesday night in South Philadelphia and died minutes later at Penn Presbyterian Medical Center. The shooting came moments after a bullet was fired into an unmarked police car that had just turned on its police emergency lights, police said.

Police said last Friday night that their criminal intelligence unit had “detected threats” against the officers present, and due to concern for the safety of the officers and their families, the names of the two officers who fired “will not be released until an investigation into these threats is completed.”

Police Commissioner Danielle Outlaw said that despite that, the department would continue its investigation in a “fair, thorough, and expeditious manner,” and would release as many details as possible without compromising the integrity of the investigation.

Police said last Wednesday that four officers in plainclothes were in an unmarked car in South Philadelphia as part of a task force responding to social media posts involving a gun. The officers said they saw two young males on a corner — one of whom appeared to be carrying a handgun — and recognized the older one as someone wanted for questioning in that firearms investigation.

The officers activated the car’s emergency red and blue lights and then heard a gunshot and the rear passenger window shattering, police said. Authorities said a bullet went through the window and passenger-side headrest. One officer suffered face and eye injuries from broken glass.

Two officers got out of the vehicle and fired at the fleeing youth. One officer chased Siderio down the street, fired two more times and struck the boy once in the upper right back area. The bullet exited through his chest, police said.

The other youth, a 17-year-old male who was not named, was taken into custody in the firearms case but was later released, police said.

Officers recovered a 9mm semiautomatic handgun equipped with a laser that had been reported stolen. The gun had one bullet in the chamber and five more in the clip, said police Deputy Commissioner Benjamin Naish.

Naish said police could not definitively say last Wednesday that Siderio had shot into the police vehicle or whether he had pointed the weapon at officers as he fled. He said the medical examiner’s indication that the bullet entered the back “doesn’t mean that he wasn’t continuing to be a threat to the officer.”