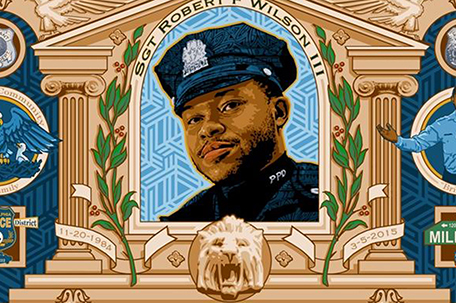 PHILADELPHIA (AP) — The Philadelphia police union is condemning the vandalism of a city mural honoring a police officer who was shot and killed during a robbery more than five years ago.

Fraternal Order of Police Lodge 5 president John McNesby said Sunday he was “saddened and angered” by the defacing of the mural honoring Sgt. Robert Wilson III in southwest Philadelphia, upon which were scrawled acronyms for two anti-police slogans as well as a symbol used by anarchists.

“Wilson served our great city with passion and compassion and is sorely missed by his friends and colleagues in the Philadelphia police department. Rest easy, Robb,” McNesby said. He said the union had been told that city crews would be out early Monday to repair the damage.

The police union later Sunday announced a $10,000 reward for information leading to an arrest in the case. Last year, a similar reward was offered for information on the defacing of another mural honoring Wilson in the Strawberry Mansion section of northwest Philadelphia.

Wilson was shot to death in March 2015 at a GameStop store where he had gone to buy a video game for one of his children. Authorities said when two men entered intending to rob the store, the on-duty officer drew their fire in an attempt to get the other customers out of the store safely.

Brothers Carlton Hipps, 32, and Ramone Williams, 28, were sentenced to life in prison with no parole plus 50 to 100 years in 2018 in a plea deal that spared them the death penalty, angering the police union and some of the victim’s family members.