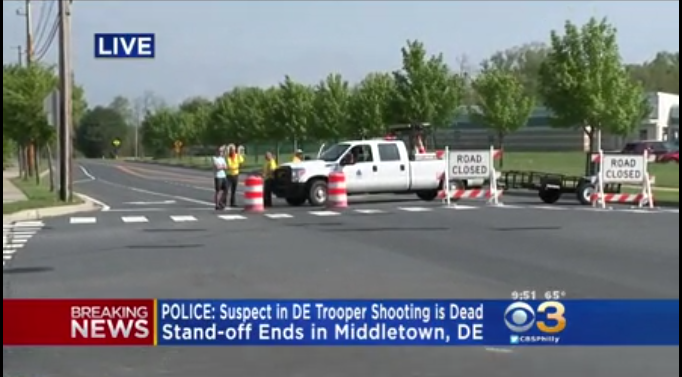 MIDDLETOWN, Del. (CBS) — The suspect wanted in the killing of a Delaware State Trooper is dead, police sources tell CBS3.

Authorities say the standoff is over. They have not released how the suspect died.

Law enforcement entered the home where the suspect wanted in the fatal shooting had been since yesterday.

Police say the he was being defiant earlier and opening fire on them.

Ballard was shot while investigating what’s being described as a suspicious vehicle at a Wawa in Bear, Delaware Wednesday afternoon.

One of the two men in the car was arrested at the scene. The other had run away and was barricaded inside of his home.

Residents were forced out their homes, some of them for well over 12 hours.

They say they are tired and frustrated, but mostly saddened that this tragedy hit so close to home.

Police said the suspect started firing at officers around 4 a.m. Tactical teams then used explosives to breech the windows, but did not enter at that time.

After fleeing the Wawa where Cpl. Stephen Ballard was gunned down, the suspect then barricaded himself inside of the home on the 500 block of St. Michael Drive in the Brick Mill Farm development.

It’s been a chaotic scene as neighbors heard the police helicopter overhead, along with explosions.

Some parents had to rush to get their children from a local elementary school yesterday after a lockdown was lifted.

Eyewitness News was able to speak to neighbors who live nearby. One who went to school with the suspect says he was a troublemaker, even as a kid.

Others say they know the suspect’s family.

The Odessa fire company opened its doors to residents who are not allowed back in their homes.