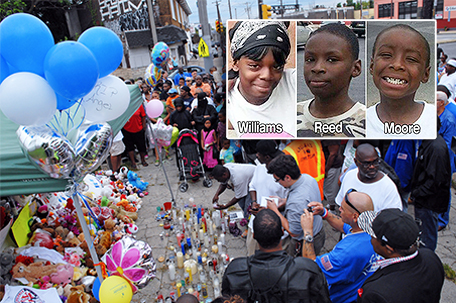 ABOVE PHOTO:  Hundreds attended the rally held Tuesday, July 29 at Germantown and Allegheny Aves. for the victims of the carjacking last week which took the lives of  Keiearra Williams, 15, and her brothers, Thomas Reed, 10, and Terrence Moore, 7 (insert.)  The children’s mother Keisha Williams, 34, remains in critical condition and is in a coma as of this printing.  Family friend Thelma Brown who was helping the family sell fruit was injured and now released from the hospital, as was the real estate agent who was carjacked.  (Photos by Bill Z. Foster)

Philadelphia police have charged two men with murder in a carjacking and subsequent crash that killed three children and critically injured their mother as they were selling fruit on a street corner.

Police say Johnathan Rosa and Cornelius Crawford have each been charged with three counts of felony murder and other crimes. Authorities also have charged that the carjack victim was sexually assaulted before the men crashed her sport utility vehicle.

Defense lawyer Christopher Warren says Rosa got in the vehicle after Crawford carjacked it. He says Rosa will regret that decision the rest of his life but is now cooperating with police.

The arrests follow a three-day manhunt underway since the Friday carjacking and crash.

Rosa, claimed earlier that Crawford had initiated the carjacking Friday and was driving the sport utility vehicle when it sped out of control and struck a family selling fruit at a street corner for a church fundraiser, said his attorney, Christopher Warren.

Rosa and Crawford had been hanging out together for a few days when Crawford noticed a woman coming down the street and decided to carjack her, Warren said.

The woman was forced at gunpoint into the backseat, police said.

About a mile from the carjacking site, the accident occurred. Witnesses reported seeing a car speeding through the intersection, then children lying motionless on the ground. 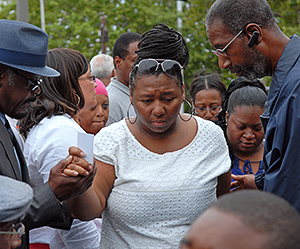 PHOTO:  Cassandra Alexander, (in white shirt) cousin of Keisha Williams is comforted by friends and other family members. (Photo by Bill Z. Foster)

Keiearra Williams, 15, and her brothers, Thomas Reed, 10, and Terrence Moore, 7, were killed. Their mother, Keisha Williams, 34, was also struck and remained in critical condition Monday.

Rosa “can’t get the image of the girl flying over the hood of the SUV out of his mind,” Warren said.

The 19-year-old was brought to the police station for questioning Saturday after his cellphone was found in the backseat of the carjacked vehicle, his attorney said. At that time, Warren said, Rosa claimed his cellphone had been stolen and he was released.

After talking with his mother and pastor, he decided to turn himself in Sunday, Warren said.

“He and his mother sat down and decided the best thing they can do is try and cooperate to atone for what happened,” he told TV stations.

He said Rosa had never been arrested before and planned to join the Marines in two months.

The accident touched off a citywide manhunt. 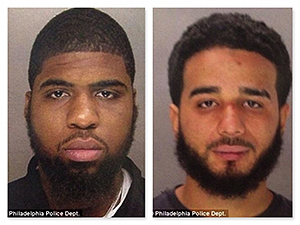 PHOTO: Cornelius Crawford (l) and Johnathan Rosa have been charged with three counts of felony murder and other crimes.  (Photos: Phila. Police Dept.)

With two men being questioned, Police Commissioner Charles Ramsey told radio station KYW-AM on Monday that that “we don’t have to have a manhunt out there right now.” But he stopped short of calling the two men suspects.

The carjacked real estate agent was allegedly sexually assaulted and suffered broken bones and other injuries. The family friend helping the family sell fruit, Thelma Brown, also injured in the accident was treated and released from the hospital.

6 ABC Action News reported that a vigil was held for the victims  on Tuesday, at Germantown and Allegheny avenues in the Tioga section of Philadelphia, with each passing hour, people stopped to bring something to contribute to the memorial and pray for the victims of last week’s carjacking and deadly crash.

Standing together, a grieving community held hands, prayed, and even cried together.

“There are so many questions we have no answers to. Our tears seem to never end. Our hearts are completely broken. We can’t believe this is our new reality, a nightmare that just won’t end,” Keisha Willams’ cousin Cassandra Alexander said.

“The conditions of the people will not change until the people change the condition within themselves,” State Representative Curtis Thomas said.

Commentator Charles Barkley has offered to pay for the funerals of three children killed in an automobile accident following an alleged sexual assault and carjacking in North Philadelphia last week.

The tragic nature of a senseless, reckless incident that claimed three young lives has led to a national outpouring of support and, in this case, an offer of aid from Barkley, who spent the first eight years of his Hall of Fame NBA career with the 76ers and still maintains ties to the city.

Barkley confirmed the offer to NBC10.com on Tuesday, but “declined to comment further, saying he did not want to take attention away from the victims.”

A preliminary hearing for Rosa and Crawford has been scheduled for Aug. 13.

Rep. Thomas offers thanks to the community following tragedy