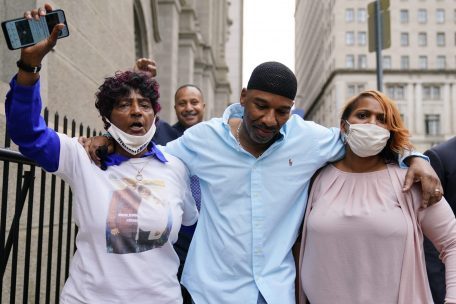 Photo: Eric Riddick, center, accompanied by his mother Christine Riddick, left, and wife Dana Baker-Riddick walks from a courthouse in Philadelphia on Friday, May 28, 2021, after spending nearly three decades in prison for a murder he says he did not commit. (AP Photo/Matt Rourke)

PHILADELPHIA (AP) — A Philadelphia man who spent more than 29 years in prison for a murder he says he did not commit was released Friday after agreeing to plead guilty to a lesser charge.

A Court of Common Pleas judge vacated Eric Riddick’s 1992 first-degree murder conviction after his attorneys argued that evidence had not been shared with the defense during his initial trial. But, rather than face a new trial, Riddick, 51, chose to plead no contest to a third-degree murder charge and time served.

Riddick’s mother, Christine Riddick, left the courthouse Friday and breathed a deep sigh saying she had waited nearly 30 years for her son to be free. Waiting a few more minutes for him to finish the administrative paperwork to be released would be easy, she said.

“He’s going to be free. It doesn’t matter what they say because I know he’s innocent,” she said, when asked whether they would continue seeking an exoneration. “That’s on the back burner because I already know the truth. I don’t need a piece of paper to tell me.”

The petition Friday under the Post Conviction Relief Act was at least the third filed by attorneys for Riddick. The first two, because of state laws for how new evidence is defined and deadlines to present a challenge once that new evidence is discovered, were not considered despite judges saying his innocence was likely.

“It is clear to all that it is likely that an innocent man sits behind bars for no better reason than a poorly conceived statute,” Superior Court Judge John T. Bender wrote in response to Riddick’s 2016 petition with concurrence from Senior Judge James Fitzgerald III.

Riddick was sentenced to life in prison after being convicted of first-degree murder in the November 1991 shooting death of 20-year-old William Catlett. Riddick has maintained he was two blocks away on a porch with some friends when the shooting happened. He was the only person charged in the crime.

A witness to the shooting told police four different versions of what he saw, naming Riddick as the shooter in the last statement, according to his previous appeals. That witness recanted his statement, but by the time Riddick learned of the official recantation, he had missed the deadline to file an appeal based on new evidence.

Riddick’s attorneys tried again to file an appeal in 2016, after hiring an expert to examine the ballistics evidence. The ballistics analysis argued from where Riddick was alleged to have been standing he could not have fired the shots, most of which the coroner said had an upward trajectory. The panel of judges said the evidence was available at trial even if the analysis was new.

But Riddick’s pleas and the evidence his defenders had gathered was enough to convince a handful of people of his innocence.

The case received a lot of news coverage in the last few years after rapper Meek Mill spoke about Riddick’s case while pushing for reforms in the criminal justice system, including of the laws that define when someone can appeal a conviction. Mill, who was briefly Riddick’s cellmate, also convinced two of the attorneys who helped secure his release to work with Riddick’s attorneys.

“Eric Riddick’s story always resonated with me because he was truly victimized by a broken criminal justice system for 30 years. I have an incredible amount of respect for the strength and poise that Eric demonstrated while dealing with this nightmare, and I’m thankful for everyone that played a role in helping him get released,” Mill said through a spokesperson Friday.

Philadelphia City Councilman David Oh was also moved after sitting down with Riddick’s mother. Oh filed a petition with Gov. Tom Wolf’s office in late 2018 seeking a pardon. That petition is still in the review process but a hearing is tentatively scheduled for February.

Oh attended the hearing Friday and said it was a bittersweet moment that did not entirely feel like justice.

“I think it’s a disgrace that he had to admit to third-degree murder to get out,” Oh said. “I’m happy he’s getting released, but I think the evidence should always rule the case. And the evidence shows he’s not guilty.”

The Philadelphia District Attorney’s office sees the case differently. Patricia Cummings, the supervisor of the office’s Conviction Integrity Unit, told the court Friday that Riddick had not received a fair trial because of evidence that was not fully disclosed.

Cummings also said the prosecutor’s office does not believe Riddick killed Catlett, but they believe there is credible evidence showing he was an accomplice in the shooting.

Riddick’s attorney, Emeka Igwe, disputed the prosecutor’s claims. He said he looked forward to the pardon hearing and urged the governor to grant the request.