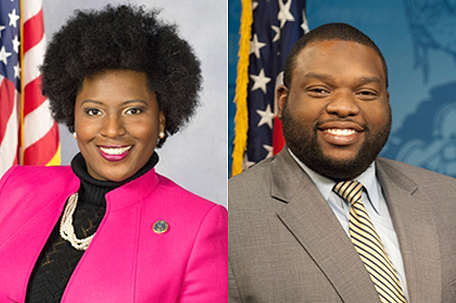 The Pennsylvania Legislative Black Caucus on Monday was presented with the Outstanding Organization Award by the Barristers’ Association of Philadelphia during their annual Dr. Martin Luther King Jr. Memorial Breakfast.

Each year, the Barristers’ Association of Philadelphia present this award to an organization that fights to ensure that minorities and people of color have full access to the rights and privileges guaranteed under the law.

State Rep. Jordan Harris, (D-Phila.), chairman of the caucus, said, “I was honored to accept the Outstanding Organization Award on behalf of the Pennsylvania Legislative Black Caucus. While we do not work for awards or recognition, it is humbling to see that our efforts to create a more fair and just society are noticed – especially from Governor Wolf, who presented us with the award. I would like to thank the Barristers’ Association for their commitment to fighting injustice and promoting awareness of the law.”

She said, “I am beyond grateful, humbled and honored to have been awarded the Outstanding Young Lawyer Award from my Barristers’ Association family. As a proud member of the Barristers’ Association and a former public defender, my commitment to seeking justice did not end after taking office. We must continue to speak truth to power and do our part in fighting hatred, injustice, and poverty in Pennsylvania and across the country.”

In her remarks, McClinton quoted King, who stated, “Freedom is never voluntarily given by the oppressor, it must be demanded by the oppressed.”

She then called on her colleagues in the legal community to take the time to “remember the oppressed in Philadelphia: the one-third of the city living in deep poverty, the 311 homicide victims in 2017, and the one in three Philadelphia students who do not graduate from high school.”

McClinton added, “Look at your hands, determine what you can do to make Dr. King’s dream a reality for our young people in Philadelphia.”