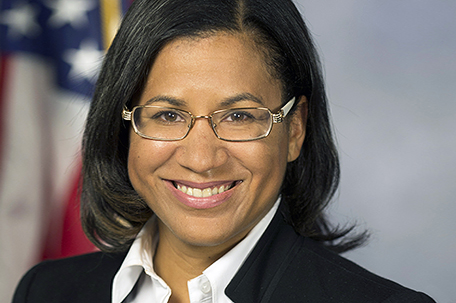 HARRISBURG, Pa. – State Rep. and Pennsylvania Legislative Black Caucus Chair Donna Bullock (D-195th Dist.) was joined by members of the PLBC, LGBTQ+ Caucus, Latino Caucus and Equity Committee today to denounce the banning of books on diversity from schools in the commonwealth.

This action was spurred in part by the overturning of a year-long book freeze in a York County school district and the new push by Republican state lawmakers to ban critical race theory, which is not taught in any district in the state currently. Two students who led the protest against the book freeze in the Central York School District, Edha Gupta and Christina Ellis, spoke at the news conference. “Banning books on diversity is the direct result of this Republican manufactured crisis on critical race theory,” Bullock said. “This fear mongering has parents and school districts scrambling to stop something that doesn’t exist. Part of the negative effect of this overreaching response is children are kept from reading books that reflect their diverse school community and world around them.

“If we continue to allow groups to pedal this misinformation, this ban will only be the tip of the iceberg. We owe our children more than that and we are calling out districts that minimize or restrict information through book bans or perpetuate this made-up crisis that is merely a political platform.”

Pennsylvania is one of a growing list of states trying to enact a CRT ban, working on enacting one or that have local school boards who criticize CRT including Arkansas, Idaho, Oklahoma, Michigan, Tennessee, Texas, Georgia, North Carolina, South Carolina, Ohio, South Dakota, Kentucky, Utah and New Hampshire, Iowa, Arizona, Florida and Virginia.

“The idea of a list of banned books in a school is dystopian and antithetical to the pursuit of knowledge, especially when those books are aimed at dismantling the power structures of racism,” said state Rep. Brian Sims (D-182nd Dist.), co-chair of the LGBTQ+ Equality Caucus. “Condemning and villainizing teachers for giving their students a well-rounded and informed look at the world is profoundly unjust and has no home in the Commonwealth of Pennsylvania.”

“Even the thought of allowing ourselves to shield our young minds from having the opportunity to learn about our diverse and sometimes divisive past goes against the core values of our society,” said state Rep. and PLBC Secretary Carol Hill-Evans (D-York). “We should be investing in an educational system that allows for honesty and value in everyone’s experiences, so the next generation expands on the American ideal of freedoms of thought and speech.”

“We’re at a moment now where we’re talking about U.S. history through the lens of these authors from different backgrounds, and the people who oppose them don’t even know how the contributions of all these folks and the folks they’re talking about influence their ancestors, their legacies and journeys in this country,” said state Rep. Chris Rabb (D- 200th Dist.). “Cultures are interwoven, they evolve, and they involve all people. When someone says, ‘I’m colorblind,’ I say, ‘I’m so sorry. If you’re colorblind, you can’t see people of color. “As a Pennsylvanian, as a legislator and a dad, I’m so proud of the students in York County who spoke out against the recent book ban,” added Rabb, a founding member of the House Democratic Equity Committee. “They inspire me to continue my advocacy for shared prosperity and justice for all.”