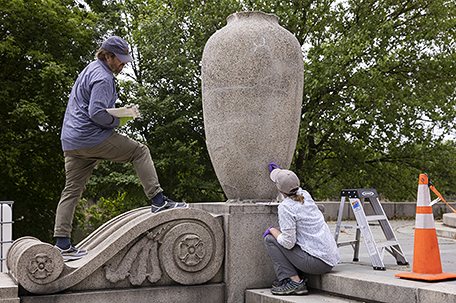 “Among numerous long-term improvements, PHS’s work to beautify the park included: investments in the park’s infrastructure and landscaping, creating and installing new site furnishings that will remain at FDR Park, and promoting the health of its trees, lawns, and green spaces for years to come.“

In pursuit of increasing PHS’s mission to create healthy living environments, PHS worked with numerous partners and alongside Philadelphia Parks & Recreation and the Streets Department to ensure that FDR Park and its users would enjoy lasting benefit from the Show’s usage of the park beyond the official Show dates.

Among numerous long-term improvements, PHS’s work to beautify the park included: investments in the park’s infrastructure and landscaping, creating and installing new site furnishings that will remain at FDR Park, and promoting the health of its trees, lawns, and green spaces for years to come.

Every year, thousands of items from the Philadelphia Flower Show such as plants and exhibit infrastructure are re-purposed or donated to organizations and community groups throughout the Philadelphia region. This thoughtful post-Show process gives a second life to plants, exhibits, and hardscape items from the Show, further benefiting local nonprofits, schools, community gardens, industries in need, and other locations while helping to spread PHS’s mission of using horticulture to advance health and well-being.

This season, in addition to its annual donations, PHS made a significant “horticulture investment” in FDR Park, refreshing its infrastructure, providing a variety of plants and shrubs, installing new park visitor elements, and building on the environmental health of this cherished park.

“PHS is thrilled that the Philadelphia Flower Show could contribute to the beautification and enhancement of one of the city’s most beloved parks. We are so happy that we can offer such a great array of items to support the work of our partners at Philadelphia Parks & Recreation, Friends of FDR Park, and the local South Philadelphia community who helped to make the 2021 Show a success.” said Sam Lemheney, PHS chief of shows and events.

The Boathouse, one of the iconic attractions of FDR Park received a face lift with a newly painted ceiling and graffiti removal. Graffiti removal and restorative treatment also occurred at one of the park’s most recognized landmarks, the Olmsted Pavilion.

Throughout the footprint of the Flower Show, walkways were newly paved to improve accessibility for park users. Philadelphia Flower Show sponsor, Subaru of America bequeathed the infrastructure for its Camp Outback mini-park, consisting of 75 boulders,15 trees, 50 shade perennials, and a bench. Subaru also donated two additional benches made from recycled Show packing material. Six additional benches were donated from the Fairmount Park Conservancy’s exhibit in addition to many other items to upgrade the park’s infrastructure such as gravel, paver stone, fencing, and water containers.

In addition, PHS helped enhance the horticulture at this historic park with donations totaling over 2,000 annuals, perennials, native plants, and trees for FDR Park to create new gardens at the park. An additional donation of 20 pallets of Belgard stone and pavers will help create borders around the new gardens and newly paved surfaces.

Tree pruning and fertilizing also took place to maintain the long-term health and safety of the tree canopy in the park. To complement the arboriculture, PHS executed lawn grading and reseeding for the majority of the 15 acres of the Flower Show grounds with plans to return for a second reseeding in the fall to ensure proper weather for the seeds to establish. Come springtime 2022, the lawn will emerge lush and green.

PHS will continue to offer consultative support to FDR Park to ensure FDR Park thrives and remains an important anchor of the local community. PHS’s work to sustain FDR Park exemplifies the organization’s mission of using horticulture to advance health and well-being for the Greater Philadelphia region.

2020 Flower Show to take visitors on a ‘Riviera Holiday’