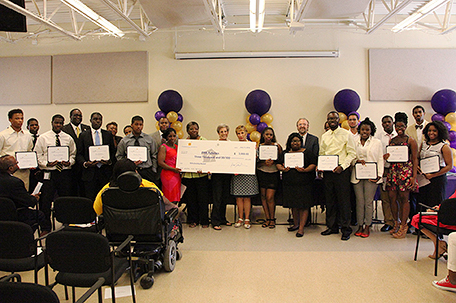 ABOVE PHOTO:  PHA’s President and CEO, Kelvin Jeremiah along with the PHA Board of Commissioners acknowledge residents who received scholarships for their outstanding work in school. Over the past two years, PHA has provided more than $350,000 in scholarships.

“I strongly believe that education is the key, the real game changer that bridges the poverty gap and provides for social and economic mobility.  I want to commend our scholars on their academic achievement and wish them continued success in the new school year,” said PHA President & CEO Kelvin A. Jeremiah.  CEO Jeremiah also said “this is another great way to empower our residents and help our families reach self-sufficiency with the education and training resources necessary to succeed in life.”

Jeremiah added that the number of residents applying for scholarships increased this year and that the judges continued to see incredible performances by students with grade point averages of 3.5 and higher.  In fact, 28 of the 53 scholarships were awarded to residents with a GPA of 3.3 or greater.  To qualify for the scholarship, students must be a current PHA resident and admitted to an accredited two or four-year college, university, or trade/technical school with a minimum grade point average of 3.0 (B) or higher.

Money for the scholarships comes from PHA’s operating budget and funds donated by vendors as part of their Section 3 commitments.

A committee composed of PHA employees, student residents, and a resident leader reviewed the applications. They considered the applicants’ essays, community service, extracurricular activities, internships, recommendation letters, and academic transcripts in making their selections. Scholarships were awarded in the amounts of $1,000, $3,000, and $5,000.

The scholarship recipients represent PHA developments around the City, as well as the Housing Choice Voucher Program. Scholarships applications for next year will be made available in Spring 2015.

PhillySeeds, Inc. is a charitable, non-profit corporation that seeks to promote the welfare of public and assisted housing residents through philanthropic activities, community-based partnerships, and special initiatives.

PHA distributes over 3,000 book bags in its annual Back to School initiative