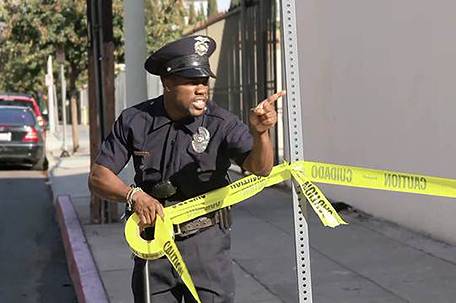 In the special, leading up to Universal Pictures’ upcoming action-comedy “Ride Along,” Hart brings his signature humor to the streets, doing ride alongs with some of the most underappreciated service professionals in order to gain a new perspective on how hard their jobs actually are.

Throughout the show, he’ll spend time with a parking enforcement officer, a security guard, and an LAPD officer, getting his hands dirty and getting into a little trouble along the way.

Hart and Ice Cube lead the lineup in “Ride Along,” the new film from the director and the producer of the blockbuster comedy “Think Like a Man.”  When a fast-talking guy joins his girlfriend’s brother—a hot-tempered cop—to patrol the streets of Atlanta, he gets entangled in the officer’s latest case.

Now, in order to prove that he deserves his future bride, he must survive the most insane 24 hours of his life.  “Ride Along” opens in theaters on Friday, January 17.

Kevin Hart is to star in the action comedy “Night School”