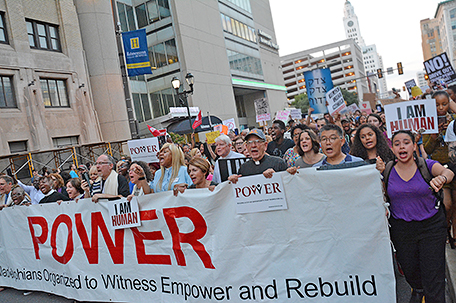 At a Wednesday night rally in Center City, more than 5,000 people joined the group POWER in calling for an end to the White supremacy that led to deadly consequences in Charlottesville.

As he stood at the podium adjusting his prayer shawl, Rabbi Mordecai Libling remembered hearing the chants of White Nationalists outside the Charlottesville, Virginia church where he was worshipping with fellow activists.

Speaking to a packed house at the Arch Street United Methodist Church on North Broad Street, Rabbi Libling, a member of the interfaith group POWER (Philadelphians Organized to Witness, Empower and Rebuild), told the audience about the protest that ended with the death of Heather Heyer, and began with chants of “Jews Will Not Replace Us” and a revival of the Nazi chant “blood and soil!”

“There is some real hatred out there,” he said. “I’ve never seen that level of vicious hatred. I’ve lost people to the Nazis. Nobody is here safe from their hatred, but love is more powerful.”

So it’s time for cities like Philadelphia to stop it in its tracks.

“White supremacy is overt and is inherent in the way the system is set up,” the Rabbi said. “We have to remember that, stand up for love and stand against White supremacy in Philadelphia.”

What that stand should look like was the focus of the #PhillyisCharlottesville rally held at Arch Street United Methodist on Wednesday night. About 3,000 people took to the streets and participated in a rally that ended with the organizers asking participants to work toward a better Philadelphia. 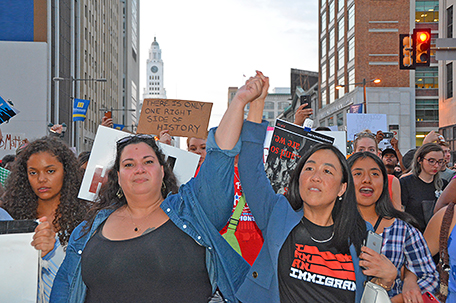 Every Sunday, the clergy members that make up POWER have a conference call to talk about the issues they’ve been working on. Sunday’s call had a sense of urgency, said the Rev. Gregory Holston, POWER’s executive director.

“First of all, my friends were there,” Holston said. “We were concerned for their safety. We didn’t know what was going on.”

The group decided to preach about Charlottesville in their sermons, but then decided to hold the rally because like many parts of the country, Philadelphia has issues that can be directly connected to White supremacy, Holston said.

On a Wednesday night, getting thousands of people to march in the streets usually doesn’t happen. But when President Donald Trump decided that there was wrongdoing “on many sides,”, folks decided that they’d had enough.

“I definitely believe what he said attracted more people,” Holston said. “You’re hearing the Nazis and the [Ku Klux Klan] being approved by the President of the United States when he says that both sides were at fault. There were clergy members sitting on the step that were being attack[ed]. The counter protesters were protecting them.”

The group of faith leaders gathered at the church and talked about ways to reach out to the disaffected men and women that organized hate groups tend to prey upon.

But they also had a list of demands that talked about the many ways that White supremacy impacts the everyday lives of Philadelphians and ways that the audience can fight them. School funding, police brutality, and a livable wage were the demands that attendees were asked to work on.

Official statement from the Virginia State Conference of the NAACP