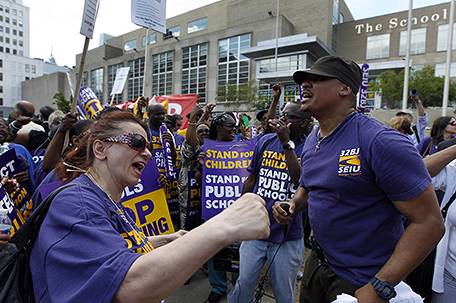 n 2013, just about everything that happened in Philadelphia began and ended at the Schoolhouse Door.

Most years here in Philadelphia, it’s kind of hard for me to know where to start when I’m putting together my annual Year-End wrap-up for the SUN.

But thanks to a combination of 24 closed buildings, funding streams that provide no funding, and a crisis that put its opening for the year in doubt, it’s safe to say that all of the news in Philadelphia for 2013 began and ended at the School District of Philadelphia’s door.

In what can only be considered an attempt to make chicken salad out of chicken something else, Superintendent William Hite and the School Reform Commission ended the 2012-2013 school year by voting to close 24 schools, including such iconic buildings as Germantown High School. This was after closing a raft of buildings to begin the 2011-2012 school year.

But despite all of the shuttered schools, a combination of severe budget cuts on the state level and the district’s $304 million deficit was a bit much to overcome and Superintendent Hite announced that unless the district got $50 million from somewhere, schools were in danger of not opening on time.

Meanwhile, the Commonwealth told the district that it would give $47 million to help the district… but only if it got all kinds of concessions from School District teachers in the ongoing contract negotiations.

Or at least that was Gov. Tom Corbett’s original plan. Once 12-year-old Laporshia Massey died from an asthma attack, and folks connected her death to cuts in school nurses brought on by slashed state funding, the money was released.

Meanwhile, School Reform Commission Chair Pedro Ramos announced he was stepping down and rumor has it that City Councilman Bill Green may be his replacement…

Although the district’s money problems took center stage for most of the year, they weren’t the only problems the district faced. When a 5-year-old girl was abducted from Bryant Elementary School in West Philadelphia by a woman dressed in Muslim garb pretending to be her mother, the district’s security procedures grabbed nationwide attention. The girl, who was sexually assaulted, was eventually found in a Upper Darby park. Twenty-year-old Christina Regusters was arrested and charged with the crime and the parents have announced their intent to sue the School District.

But while the School District was where most of the action was in Philadelphia in 2013, it wasn’t the only place. In June, a three-story building collapsed on the Salvation Army thrift store at 22nd and Market Streets, killing six people.

The crane operator, Sean Benschop, proving why you should never operate heavy machinery while high on marijuana, and demolition contractor Griffin Campbell, have been charged with manslaughter and conspiracy in the incident. A grand jury is also investigating the incident and city officials are planning on taking a look and making changes to the city’s construction regulations.

In crime and safety news, the city’s rate of violent crime went down this year. That was the good news.

The bad news was that the number of people being shot and in some cases killed in standoffs with police was going up…and no one could figure out why. To try and find those answers, Police Commissioner Charles Ramsey asked the Justice Department to take a look at the city’s deadly force policies. This came after a Philadelphia Inquirer article that showed the disparity and how difficult it was for the Police Advisory Commission to find out what was going on.

West Philadelphia abortion doctor Kermit Gosnell also had his day in court in 2013….but to many conservative news sites and Fox News itself, the proceedings wasn’t getting enough press coverage.

Dr. Gosnell was convicted of three counts of first-degree murder for killing three babies that were born alive at his Women’s Medical Society at 38th and Lancaster. He was sentenced to three life terms for the murders, the result of his agreeing to forego an appeal of his conviction in exchange for prosecutors foregoing the death penalty.

Gosnell’s house of horrors, a place that included a freezer that contained fetuses frozen in water bottles and jars of little feet, was discovered when police began investigating him for running a pill mill out of his clinic. He later pled guilty to federal drug distribution charges and will be serving an additional 30 years as a result.

But in another one of those grenades lobbed as part of the culture wars, right-wing commentators bemoaned what they saw as a lack of press coverage of Dr. Gosnell’s trial. After pictures of an empty press gallery went viral and the old saw of “liberal media” came out, it became the desired press event.

And interesting is where any new year should begin.