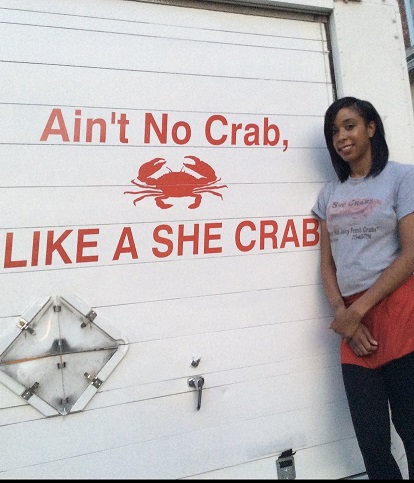 Over 8,000 Philadelphians know this, waiting for their Instagram notification announcing the daily pop-up to purchase their fix of the famous She Crab.

Who is She Crab?

Fun fact: Terry loved crabs so much as a child, that in adulthood, she dropped out of dental college at Harcum College to–you guessed it–sell crabs.

“I would save my money for after school to go buy crabs,” recalling her childhood obsession with eating crabs.

Starting out with a case of tasty cooked seasoned crabs and a dream, Terry took “by any means necessary” to whole new level.

Before getting her truck, Terry started with nature’s transportation–her own two feet.

“I started selling door-to-door.” (Yes, she started knocking on people’s doors to peddle her crabs).

“I did that for two summers. By the third summer, I was able to purchase a truck.”

That determination was the pathway to her successful business and actualizing her dream of being the neighborhood crab lady.

Faithful foodies follow Terry on Instagram @shecrabs for the daily announcement of where that famous white truck with the red crab painting on the side will anchor for business.

Terry posts on Instagram daily by noon the location she will sell her scrumptious blue-shell crabs from 4:30 to 7 p.m.

Folks are usually lined up outside before opening time to purchase Terry’s famous blue shell “She Crabs” which range in size from small to extra-large and are sold by the dozen at varying prices from $20-$36.

She usually sells out before 7 p.m.

For starters, she has her own house blend seasoning.

And, she respects the craft. Before selling her crabs door-to-door, she consulted business owners in the crab business to fine tune the art.

“I traveled all over to learn how to make the best crabs. I remember driving down to Maryland to meet with a lady and her husband who owns a successful Crab Shack there,” said Terry noting that she equates cooking crabs as a science.

And, the hard work has paid off.

She has been selling crabs for over 4 years now and loves being mobile.

“I like the flexibility. I have the opportunity not to have my crabs in just one neighborhood. I’m able to pop up in Southwest Philly, in West Philly, in Yeadon, in South Philadelphia all the way to the people on City Line Avenue. It just gives me a chance to be all over,” said Terry, who is also a mother of two.

Each year from April through the end of October, Terry sells crabs from her truck daily, unless there’s no catch.

During the winter off season, she provides academic tutoring services for youth via her “She Tutor” program.

As for Terry’s long-term goal, as an addition to her crab truck business, she would like a storefront to call home and dedicate it in honor of her late mother Janet who passed away recently.

“My mother invested everything in me. She believed in me. She paid my rent one time for a whole year so I could put all my little money in my truck,” said Terry as she choked back tears speaking of her mother Janet who recently passed away.

Terry’s mother was her chief supporter and advocate.

“I was blessed to have someone that believed in me.”

Writers Note: Warning, Terry’s She Crabs are addicting. I had the opportunity to taste them. Truly, they are the best crabs I had in my life.

Follow She Crabs at Instagram.com/shecrabs for daily location announcements. Call or text for all crab orders at (267) 648-9574.