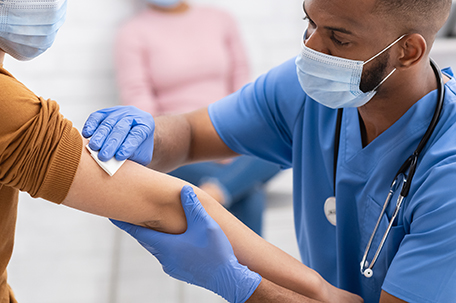 The city recently severed ties with the group, whose CEO recently admitted to taking doses home to hive to his friends on the Today show.

Philly Fighting COVID has been the subject of much scrutiny lately after the Philadelphia Department of Public Health cut ties with the group following shifts in the group.

The group recently changed its corporate status from non-profit to for profit, updated a privacy policy that put the security of vaccine seeker’s personal data in question, and shut down testing operations abruptly.

And on Thursday, the 22-year-old Drexel psychology student admitted to doing so in his first interview since the controversy began.

On the Today Show, Doroshin admitted to taking city-provided vaccine doses home and giving them to his friends, who are much younger and at lower risk than people in the 1A vaccination phase.

He told Today Show reported Stephanie Gosk he is not qualified to administer vaccination shots and that he gave them to his friends because the doses would not have been used otherwise.

Gosk asked Doroshin why give them to younger people with lower risk of serious infection rather than older, more at-risk residents.

“We called everybody we knew, every single person,” he said referring to finding others who need or want the vaccine.

While Doroshin admits it was a mistake to do so, he stands by his choice.

The group managed to administer about 7,000 first doses of the vaccine at the vaccination site at the Pennsylvania Convention Center. City health officials said they have information on everyone who received the first dose at the site and are planning to contact them to administer the second doses.

“It is concerning that reportedly Philly Fighting COVID appears to have misrepresented its role in vaccine distribution and is reported to have failed to disclose information about a for-profit operation,” he said. “Like many members of the public, I have questions about the methods used by Philly Fighting COVID in collecting personal data from people signing up for vaccine information, and what this company plans to do or might have already done with that personal data, as well as WHYY’s reporting today that suggests the company’s founder might have taken vaccines meant for public distribution into his personal possession.”

Krasner said anyone who has information about what they believe to be crimes related to Philly Fighting COVID or any other pandemic relief efforts to contact the DA’s Special Investigations Unit directly at [email protected] or 215-686-9608.