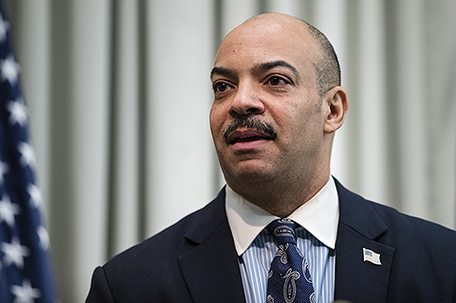 AP (PHILADELPHIA)–Philadelphia’s top prosecutor was charged Tuesday with taking more than $100,000 in luxury gifts, Caribbean trips and cash, often in exchange for official favors that included help with a court case, according to a bribery and extortion indictment unsealed Tuesday.

The indictment caps a nearly two-year investigation into Philadelphia District Attorney Seth Williams’ financial affairs. Williams, a Democrat and career prosecutor who makes $175,000 in the top job, has said he ran into financial trouble after a divorce and while paying private school tuition for his daughters.

The indictment described gifts that included trips he took with his then-girlfriend to a Dominican Republic resort, where they stayed in a presidential suite; a custom $3,400 sofa; and a used Jaguar convertible, with insurance coverage to match.

In exchange, authorities said, Williams offered to help a friend’s friend seek a reduced jail sentence in a criminal case. They also said he took $7,000 for helping a business owner friend meet with an airport police official in an attempt to avoid enhanced screening when returning to the U.S. from foreign trips.

Williams, who was known to frequent cigar bars and dine at the city’s ritzy Union League private club, also spent $20,000 in funds earmarked for a relative’s nursing home care, the indictment said.

Williams was spending Tuesday huddled with family, a spokesman said, and was expected to surrender and be arraigned on the charges Wednesday. Defense lawyer Michael Diamondstein said they would vigorously defend the charges.

Williams, the city’s first black district attorney, announced last month he would not run for a third term this year. The 50-year-old said he showed poor judgment and regretted “mistakes in my personal life and in my personal financial life.” Eight people, seven of them Democrats, are running for his seat in the predominantly Democratic city.

As recently as January, Williams had hoped to weather the scandal, vowing to earn back the “trust and respect” of his staff and the public. However, questions about the investigation dogged him as he tried to carry out his duties. The charges announced Tuesday also included honest services fraud.

Special agents with the FBI, IRS and Department of Homeland Security declined to elaborate on the charges at an afternoon news conference. They would not explain, for instance, why the foreign traveler sought quicker screenings, but acting U.S. Attorney William Fitzpatrick of New Jersey said no security measures had been thwarted. His office supervised the case given Williams’ work ties to Justice Department officials in Philadelphia.

Williams failed to disclose five sources of income and 89 gifts on financial statements from 2010 through 2015 and omitted 10 items on an amended statement. The gifts also included sideline passes for Philadelphia Eagles games for several years, nearly $21,000 in free airfare, a free roof, and a $6,500 Rolex watch from a girlfriend.

“My poor judgment caused distractions, and made the already difficult job of my … staff even more difficult,” Williams said.

During his seven-year tenure, his office filed the first charges against several Roman Catholic priests and earned a trial conviction against the first U.S. church official ever charged over the handling of priest sex-abuse complaints. The conviction has since been overturned, although the official served nearly three years in prison.

State laws require public officials to file annual reports and list gifts over $250. City officials cannot take anything worth more than $99 from anyone with an interest in any “official action.” Federal bribery laws typically involve a “quid pro quo,” or evidence the person got something in exchange for the gift.

Williams grew up in Philadelphia and served as student president of Pennsylvania State University. He also teaches at a law school and serves in the National Guard