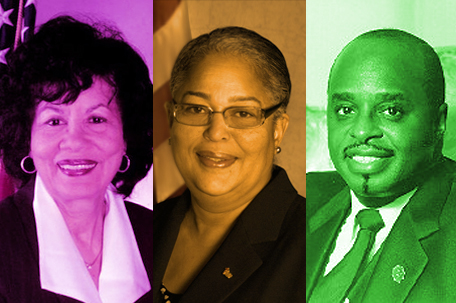 Three more current or former lawmakers from Philadelphia have been charged with taking up to $2,000 in cash in an influence-peddling probe once dropped by the state’s top prosecutor.

Brownlee and James have acknowledged wrongdoing to a grand jury and expressed remorse, Philadelphia District Attorney Seth Williams said at a news conference.

Bishop is accused of accepting $1,500 from the lobbyist, Brownlee $2,000 and James $750. Bishop also agreed to “stack’’ a liquor control committee to help push to privatize the industry on the lobbyist’s behalf, he said.

Williams said it pained him to file charges against the lawmakers, who include fellow Democrats and long-time friends. He said that other lawmakers had rebuffed the lobbyist, an informant working under cover for prosecutors, when he showed up at their offices talking about money.

“I have known and looked up to Rev. Bishop almost my entire life,’’ Williams said. “My mother listened to her gospel radio show. … Mrs. Bishop (thought) all that would save her in the end. That is what she told many people. But it can’t.’’

Bishop’s lawyer accused Williams of breaching grand jury secrecy rules by telling reporters that Bishop invoked her rights under the Fifth Amendment, which protects against self-incrimination. He also said his client would fight the charges.

“Telling the public that she refused to answer questions and pled the fifth is horrifyingly unethical and illegal,’’ lawyer A. Charles Peruto Jr. said.

Jeremy Walker, James’ lawyer, declined to comment and Brownlee’s lawyer did not immediately return a call for comment.

Six people have now been charged in an investigation once abandoned by Attorney General Kathleen Kane. They are accused of improperly accepting cash or gifts from informant Tyrone Ali.

Democratic representatives Ron Waters and Vanessa Lowery Brown of Philadelphia have also been charged while ex-Philadelphia Traffic Court Judge Thomasine Tynes, accused of with accepting a $2,000 Tiffany bracelet, has pleaded guilty to a conflict of interest charge.

Kane has said the probe was too flawed to yield convictions. Some of the investigators who started the probe in her office now work for Williams.

The district attorney called Kane “her own worst enemy.’’

Peruto accused Williams of filing the charges in Dauphin County, which is home to Harrisburg, to find jurors more willing to convict than Bishop’s fellow Philadelphians. By contrast, he said, the alleged crime, prosecutor, grand jury and supervising judge were all based in Philadelphia.

“But he chose to bring charges in Harrisburg because it’s not about justice, it’s about a county that’s most likely to convict,’’ Peruto said.

Williams revived the case in June after The Philadelphia Inquirer reported that Kane had shut it down.